How Many Letters in the Alphabet?

When someone talks about the number of letters in the alphabet, many of us assume that he is talking about the English language, this is not a good assumption because there are many different languages around the world.

The word “alphabet” was derived from the first two letters of the Greek alphabet, “alpha and beta”. An alphabet is a set of basic written characters, symbols, graphs, or graphemes that represent the phonemes or phonemic structure of different spoken languages.

The Proto-Canaanite script was the first fully phonemic script. It was later known as the “Phoenician alphabet”. This script is the ancestor of all modern alphabets, including Arabic, Cyrillic, Latin, Greek, Hebrew, and Brahmic. This script was created by Semitic-speaking workers and slaves in the Sinai Peninsula.

In the Middle Bronze Age (the prehistoric period that was characterized by the use of bronze), 15th century BC, Proto-Sinaitic script appeared in Egyptian turquoise mines. In 1999, John and Deborah Darnell discovered an even earlier version of this first alphabet at Wadi el-Hol dated to circa 1800 BC.

The South Arabian alphabet, called the sister of the Phoenician alphabet. Vowels were called “abjads” in Arabic, Hebrew, and the Syriac language. In Greece, the Proto-Sinaitic script was modified to add vowels. This gave rise to the ancestor of all alphabets in the West because it was the first alphabet in which vowels were separate from consonants.

Slovak alphabet is derived from the Latin alphabet and it is the longest European alphabet which has 46 letters.

In Korea, Hangul (Korean alphabet is called Hangul) was created by Sejong the Great. Sejong the Great was the fourth king of the Joseon dynasty of Korea. Hangul is a unique and featural alphabet. In Hangul, the letters are designed from a sound’s place of articulation.

How many letters in the alphabet? The answer to this question depends on the language of which alphabet you want to know. The word alphabet is derived from two Greek words, alpha and beta. Alphabet is the set of basic written characters, symbols, and graphs. Every language has a different alphabet. The alphabets are originated in ancient Egypt and 24 hieroglyphs are the ancestors of all alphabets. These 24 hieroglyphs are also called uniliteral. They gave rise to the Greek alphabet, Italic and Latin alphabets were originated from the Greek alphabet. Aramaic alphabet was the origin of the Arabic alphabet, Hebrew alphabet, Syriac alphabet, and other abjads.

The shape of these letters depends upon the type of font and handwriting of a person. English alphabet has 26 letters, 5 letters are vowels and the rest are consonants.

Consonant is a basic speech sound that is produced by human beings in which when the breath flows out through the mouth is blocked by teeth, lips, and tongue. There are 21 consonants in the modern English alphabet. These are,

A vowel is a basic speech sound made by changing the shape of the upper vocal tract or the area in the mouth above the tongue. In vowels, breath is not blocked by lips, teeth, and tongue. There are 5 vowels in the modern English alphabet. These are, 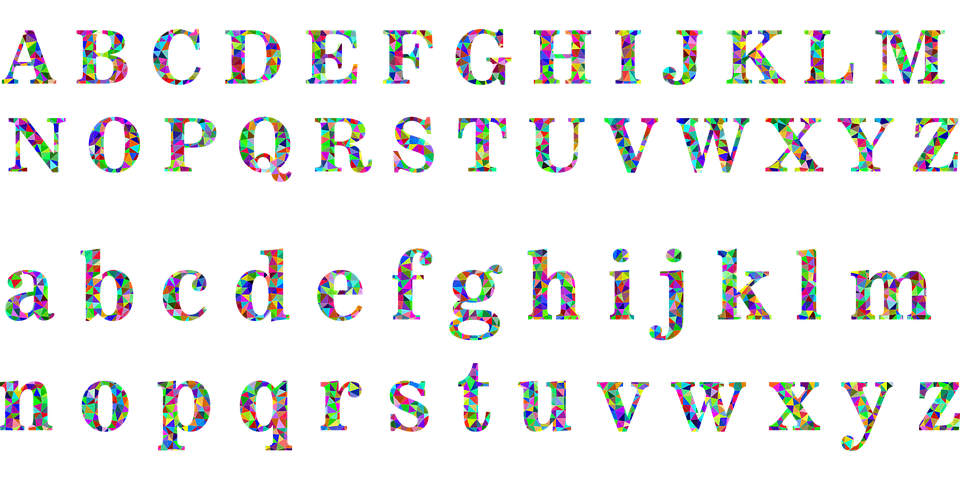 In the 7th century, Christian missionaries introduced the Latin script. This Latin script was used to replace the Anglo-Saxon futhorc runic alphabet. The Anglo-Saxon futhorc runic alphabet greatly influenced the emerging letters of English’s alphabet by providing the letters “thorn (Þ þ)” and “wynn (Ƿ ƿ)”. The letter “eth (Ð ð)” was also added and it was formed by modifying the modern English letter “D”. The letter “yogh (Ȝ ȝ)” was added into the alphabet and it was created from “insular g (a form of letter “g” resembling the tailed “z”)” by Norman scribes. The letter a-e “ash (Æ æ)” was added. It is a ligature (two or more letters or graphemes are joined as a single glyph).

In 1011, a person named, Byrhtferth (priest and monk who lived at Ramsey Abbey in Huntingdonshire in England) recorded the traditional order of the alphabet of the Old English. He wrote 24 letters of the Latin alphabet first and then added 5 additional English letters.

The Old English did not contain “J”, “U”, and “W” as compared to modern English.

Modern English has many diagraphs, but the status of independent letters is not given to these diagraphs.

Diagraph or diagram is a pair of characters that are used in the orthography of a language to write a single phoneme or a sequence of phonemes that do not correspond to the normal values of the two characters combined.

Letters in the alphabets of different languages 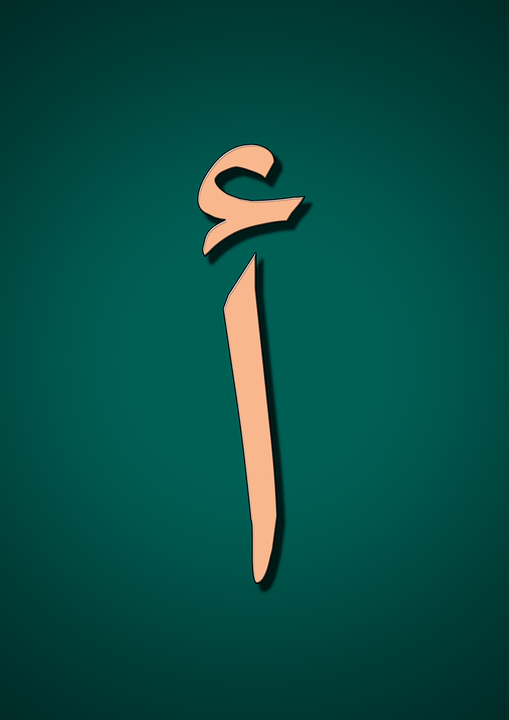 The abjadi order is derived from the Phoenician alphabet and this order is used for lettering.

Modern dictionaries and reference books do not use abjadi order. They use hijai order in which letters are grouped on the basis of similarity in shape. There are two types of hijai orders.

In the Japanese writing system, there are 2000 symbols from three alphabets. These alphabets are “kanji”, “hiragana”, and “katakana”.

Kanji consists of pictograms that originated in China. It is used to write most content words of native Japanese or Chinese origin which include the following:

The stem of most verbs and adjectives

The stems of many adverbs

Hiragana are used to write,

Various function words, such as grammatical particles and postpositions.

It is used to write the following:

Translation of foreign words and names.

Common names of animals and plants.

Miscellaneous other words whose kanji are rare.

Onomatopoeia (the process of creating a word that phonetically imitates). 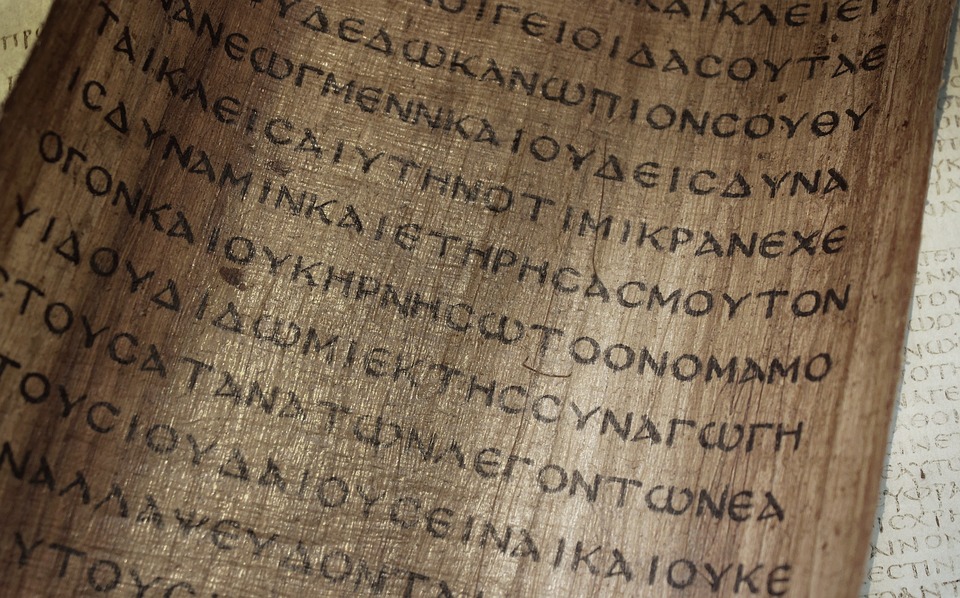 There are 26 letters in the German language’s alphabet. These letters are the same as the English letters. The German language is not so tough and you can easily learn it by learning its letters.

The letters of the Hebrew language’s alphabet are given below,

Burmese is a Sino-Tibetan language. It is spoken in Myanmar where it is an official language and the language of the Bamar people. There are 41 letters in the Burmese alphabet. 33 letters are consonants and the remaining eight are vowels. The Burmese alphabet is called the most beautiful alphabet in the world. These are composed of circular shapes that are always drawn clockwise.

There are 28 letters in the Arabic language. Abjadi and hijai are the two main sequences of the Arabic language’s alphabet. The non-alphabetic script is used in the Chinese writing system. There are more than 100,000 characters in the Chinese writing system. There are three types of the alphabet in the Japanese language and it consists of more than 2000 symbols. Korean alphabet has 24 characters and the Korean alphabet is called Hangul. Russian alphabet has 33 letters and the Spanish language contains 27 letters. The French language has 26 letters as in English but they are different in pronunciation. The Greek language consists of 24 letters and it is an ancient language. The German language contains 26 letters. The Hebrew language has 22 letters. The Burmese alphabet is the most beautiful alphabet having 41 letters.

Do all writing systems represent languages in an alphabetic way?

No, not all the writing systems represent languages in an alphabetic way.

In “Syllabary (the linguistic study of written languages)”, every character represents a syllable (unit of organization for a sequence of a speech sound).

In “logographic systems”, semantic units or morphemes (smallest meaningful unit in a language) are used to represent languages.

Is there a sentence that contains all the letters of English’s alphabet?

Yes, there is a sentence that contains all the 26 letters of English’s alphabet. This sentence is, “the quick brown fox jumps over the lazy dog”.

Does communication depend upon the alphabet of a language?

Which language has the longest set of the alphabet?

Which language has the shortest set of the alphabet?

Which language’s alphabet has the most consonants?

Thorn (Þ, þ) is a letter. It was used in Old English, Gothic, Old Norse, and Old Swedish. In English, it was replaced by the digraph “th”. Thorn is still used in the modern Icelandic alphabet.

A syllabary is a set of written symbols used to represent the syllables of the words of a language. Some syllabaries include separate symbols for each possible syllable that may occur in the language and others use a system of consonant symbols that include an inherent vowel.

What is the difference between syllabary and alphabet?

Alphabet is the standard set of letters that represent speech sound. While in a syllabary, each symbol correlates to a syllable or mora. It is a system where each symbol represents a spoken syllable, consonant + vowel.

Alphabet is the set of basic written letters or symbols. How many letters in the alphabet? The answer to this question depends on the language of which alphabet you want to know. The history of the alphabet started in Egypt with 24 hieroglyphs. Then Greek alphabets were originated and they gave rise to Italic and Latin alphabets. There are 26 letters in the modern English alphabet. These were taken from Latin script. Many diagraphs are also present in modern English but they have not given the status of a separate letter. The Arabic language has 28 letters. It has two main sequences that are Abjadi and hijai. Chinese writing system contains more than 100,000 characters but only 3000 to 6000 are more important than the remaining. The Korean alphabet is called Hangul. French and English alphabets are the same but their pronunciation is different. The Burmese alphabet is the most beautiful alphabet having 33 letters.

German Language: German (Deutsch), is a West Germanic language that is chiefly spoken in Central Europe. It is the most spoken language in Germany, Austria, Switzerland, and in the German-speaking Community of Belgium and Liechtenstein. It is one of the three official languages ​​of Luxembourg and a co-official language of the Opole Voivodeship in Poland. The German language is more like different dialects ​​in the West Germanic language branch, including Afrikaans, Dutch, English, Frisian dial…

German has three extra vowels: ä , ö , and ü . The German word for those curious double dots over the vowels is Umlaut ( oom -lout) ( umlaut ). Umlauts slightly alter the sound of the vowels a , o , and u , as outlined in this table. These sounds have no equivalent in English. Pronouncing Vowels with Umlauts [image] To make your German vowels ä , ö , and ü sound a bit more authentic, try progressing through the ä , ö , and ü sounds, pronouncing the vowels as though you’re gett…

What does asl mean? Education

What does ASL mean? In simple words, ASL has three meanings. ASL or asl (lower case) stands for “American sign language” used for deaf and dumb peoples. In the modern age, asl or Asl means age, sex, and location, generally used in chat and text to get information about the person who talks. Asl is also used in the written context of “as ■■■■”. For example, if someone annoys you then you could write “you are annoying asl”. https://cdn.pixabay.com/photo/2020/07/07/19/48/sign-language-5381753_…

Foods that start with K
Irish Last Names
How to change language on netflix
Is Infinity A Number?
Partial highlights
Hard words to spell
States in alphabetical order
Chess rules
Rainbow Color Order
Boy Names That Start With Y
Horse colors
Meda In Spanish
Cars that start with d
What Is A Measure In Music
Hard Words to Pronounce
Japanese words
Iq range
Russian language
Teacher in Latin
Bands with numbers in the name
a university or an university
How long does it take to learn russian
Difference between Send and Sent
Mille Grazie
Cars That Start With A
Marc Anthony Net Worth
Nordyne Serial Number
Seoul Pronunciation
How to introduce yourself in group discussion
Are Days Of The Week Capitalized
I Love You In Morse Code
The Disastrous Life of Saiki K season 2 Dub
Do Your Ears Ring When Someone is Thinking About You
Best Bible to read and understand
Who Makes Infiniti Cars
Manhattan Zip Code
How To Address A Post Card
444 Meaning
Alpha m
How to set up a letter
Hebrew pronunciation
Text Mail Subscriber
What Is The Internet?
Arabic pronunciation
Top 10 Best Math Books For Beginners
How to use runes
The greek alphabet