Because the strict definition of “salad” describes any type of mixed-ingredient dish served cold, there are dozens, if not hundreds, of salad varieties served around the world. One of the reasons so many well-known kinds of salads exist is that they can be based on vegetables, fruits, legumes, grains, meat and cheese.

Technically, any salad that includes lettuce is a “green salad.” But, from a culinary standpoint, the star of a green salad is the lettuce. The four main types of salad lettuce are:

In addition to these four main types of salad greens, salad lovers also may want to use arugula , with its small leaves and intense, mustard-like taste; endive , for its counter-punch of bitterness; frisée , a frilly-leaved, bitter green; mache , with small, mild leaves; radicchio , which resembles red cabbage but provides a slightly bitter flavor; salad burnet , a delicate green tasting of cucumbers; and watercress , which contributes a peppery flavor.

A well-made green salad features two or three kinds of salad greens cut or torn into bite-sized pieces, along with halved cherry tomatoes or chopped beefsteak tomatoes. The addition of cucumbers, onions or bell pepper gives extra crunch. The dressing should be a light oil and vinegar combination to showcase the greens. Croutons are added at the last minute to preserve their texture.

Caesar salad is famed for its creamy dressing, which is made from fresh Parmesan cheese, egg yolks, mustard, anchovies, olive oil, lemon juice and seasonings. This iconic dressing is spooned over whole romaine leaves and topped with large croutons and additional shaved Parmesan.

The salad was invented sometime in the 1920s at Caesar’s Place in Mexico. At restaurants, it’s often tossed tableside on a special stand before being presented on individual plates. If you’re leery about working with raw eggs in your own kitchen, treat yourself to a restaurant that specializes in the legendary salad.

A chef salad is one of the most well-known main course types of salads. It’s essentially a basic green salad topped with thin strips of ham, turkey, cheddar cheese and Swiss cheese, as well as chopped boiled eggs, bacon pieces and the salad dressing of your choice. Of course, this basic concept offers plenty of opportunity to switch up the cheese and meat selections.

Named after the famous New York hotel in which it was created, crispy, creamy Waldorf salad consists of equal parts apples and celery, along with walnuts and halved red grapes. Enough mayonnaise is added to coat all of the ingredients. Some people serve it on a bed of lettuce.

Coleslaw devotees endlessly debate the ratio of creaminess-to-tanginess in their coleslaw. A basic slaw consists of chopped or shredded green cabbage, tossed with a dressing made from mayonnaise, vinegar, sugar, salt and pepper. Some people add shredded red cabbage or carrots for a bit of color. The crispiness and slight tartness of coleslaw make it a great companion to heavier entrees, like ribs, burgers and even Chinese food.

In fact, if you’d like to round out your takeout Chinese by preparing a fresh dish to accompany it, an Asian coleslaw is ideal. In addition to the shredded red and green cabbage base, radish and scallions give extra bite, while rice vinegar and miso liven up the mayonnaise dressing. Peanuts or almonds, along with sliced mandarins, are sometimes added.

Once it’s chilled, pasta transforms into something totally different from its heated counterpart. Typically, short types of pasta are used in pasta salads. Any list of pasta salads usually includes corkscrews, elbow and “bow-tie” pasta, along with a vinaigrette dressing. Aside from tomatoes, sweet peppers, baby corn and other vegetables, crumbly cheese like feta gives pasta salad special flair. Extras like artichoke hearts and olives are often added. To turn it into a main course, add chickpeas, cubed chicken, shrimp or ham.

One iconic member of the pasta salad family is macaroni salad — a picnic staple. Macaroni salad is nearly always mayonnaise-based and made with elbow macaroni. Regional variations might call for the addition of relish and pimentos or extra crunch from celery and onions. For a little extra zing, mustard or hot peppers can be added.

Although some might argue that these kinds of salads should be better known as sandwich spreads , these protein-based dishes have a rightful place on any list of salads. The ingredients are tightly bound with a heavy creamy dressing.

Any list of salads should include at least one basic fruit salad , which is a mixture of cubed fruit and a sweet dressing. Taco salad is served in an edible bowl made of a fried tortilla shell and filled with seasoned ground beef, shredded cheddar, shredded lettuce, tomatoes, guacamole and sour cream.

Tabbouleh is a Middle Eastern chilled salad based on couscous or bulgur wheat with mint, parsley, tomatoes and a light dressing. The classic marinated three bean salad isn’t always limited to three legumes, but it does have a least one kind of fresh snap bean, along with two cooked dried beans such as kidney and garbanzo. Cobb salad is a main dish composed salad. Cobb salad consists of mixed greens, chicken breast, Roquefort cheese, hard-boiled eggs, chopped bacon, avocado, tomatoes and a mustard-oil dressing. 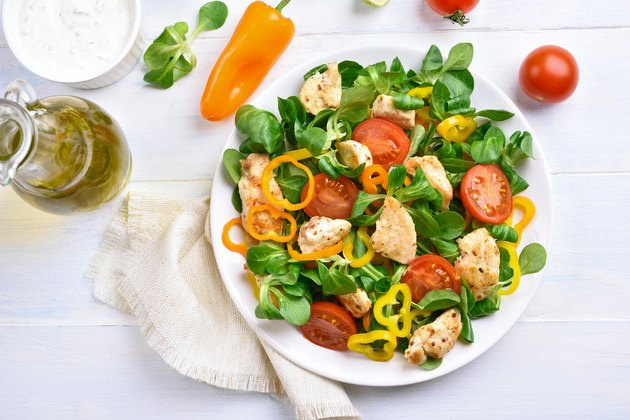