Problem solving is our ability to solve problems in an effective and timely manner without any impairment. It involves being able to identify the problem, generating alternative solutions, evaluating and selecting the best alternative.

Types of Heuristics in Judgment and Problem Solving:

Following are the types of heuristics which people use in their daily decision making.

Availability heuristic is a mental shortcut that comes to a person’s mind when evaluating a specific topic, concept, method or decision.

A representative heuristic is a cognitive bias in which a person categorizes a situation based on a pattern of previous experiences or beliefs about the situation.

Algorithm is one that is designed to solve a problem in a faster and more efficient way than traditional methods by accuracy, precision, or completeness for speed.

Intuition refers to our ability to understand something without reasoning. Heuristics are quite convenient to us in taking rapid decisions.

Intuition can impact judgment through either cognition or emotion, and there has been some suggestion that it may be a means of bridging the two.

Cognitive biases are organized patterns of deviation from norm in judgment, and are frequently studied in psychology.

An instance is choosing to skip school because all of your friends were also skipping school. 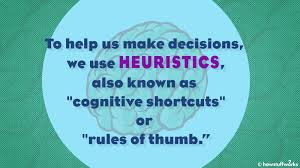 The social heuristic involves an individual taking social (or non-social) information, and inputting it into each of their social circles, retrieving a census based on the information, opinions, and judgments given back**.**

Stereotypes can be viewed as judgmental heuristics that are sometimes used to simplify the cognitive task confronting by the social perceiver.

Whether we respond to others based on our general beliefs about their group or a thoughtful analysis of each person’s.

When we see someone driving an expensive car, and assume they’re rich but they could be a tow truck driver on a joyride.

The affect heuristic is a heuristic, that allows people to make decisions and solve problems quickly and efficiently, which include current emotion, fear, pleasure, surprise etc.

The working backward heuristic is a method of problem solving in which a person imagines they have already solved the problem they are trying to solve. By imagining the problem is solved they can then work backwards in their mind and eventually imagine a solution to the problem.

Suppose one is planning a trip from Karachi to Murree. One wishes to arrive at Murree hotel. To arrive, one needs to take a taxi from Airport. To arrive at the airport, one needs to fly on an airplane; and so on, back to one’s point of origin.

A person considers that what they have observed in the past, and applies that history to a condition where a more definite answer has not yet been decided.

With an educated guess a person reaches a conclusion without exhaustive research.

Authority heuristic occurs when a person believes the view of an individual of authority on a business just because the person is an authority number. People apply this heuristic in all fields such as science, politics, and education.

For example, that a legal professional in one country wants to know whether particular conduct in another country B will encounter legal problems. Her client would like to exchange with a competitor in country B specific information about prices of a product that both sell in B. She knows that in country Asuch conduct would be considered anticompetitive and violate the antitrust or “competition” laws, and she wants to understand the situation her client faces in B. She is likely to turn to a source that she considers authoritative as part of her inquiry.

Here are some frequently asked questions regarding the heuristics in judgment and problem solving.

What is heuristics in judgment and problem solving?

A heuristic technique, or a heuristic, is any approach to solve the problem that utilizes a practical method or several shortcuts in order to create solutions that may not be optimal but are adequate given a limited timeframe or deadline.

How do you solve heuristic problems?

Heuristics are typically mental shortcuts that assist with the thinking processes in solving the problem.

They involve using: A rule of thumb, an educated guess, an intuitive judgment, stereotyping, profiling, and common sense.

What makes a heuristic good?

In computer science, particularly in algorithms linked to path finding, a heuristic function is said to be acceptable if it never overestimates the cost of reaching the goal, i.e. the cost it evaluate to reach the goal is not higher than the lowest possible cost from the current point in the path.

What is the opposite of heuristic?

What happens if heuristic is not admissible?

What is the difference between heuristic and Metaheuristic?

Heuristics are often problem-dependent, you define a heuristic for a given problem. Problem-independent techniques are Metaheuristics that can be applied to a broad range of problems. A heuristic is, for instance, selecting a random element for pivoting in Quicksort.

Availability heuristic is a mental shortcut that comes to a person’s mind when evaluating a specific topic. A representative heuristic is a bias in which an individual categorizes a situation based on a pattern of previous experiences. Algorithm is one that is designed to solve a problem in a faster and more efficient way. Intuition refers to our ability to understand something without reasoning. Cognitive biases are systematic patterns of deviation from norm in judgment. Social intelligence is just general intelligence. Stereotypes are used to simply the cognitive tasks. Affect heuristic is used to make judgments. Working backward heuristic is a method of problem solving.