What are the Dreams?

What are the dreams?: A dream is a series of ideas, images, emotions, and sensations that normally occur automatically in the mind during certain stages of sleep. 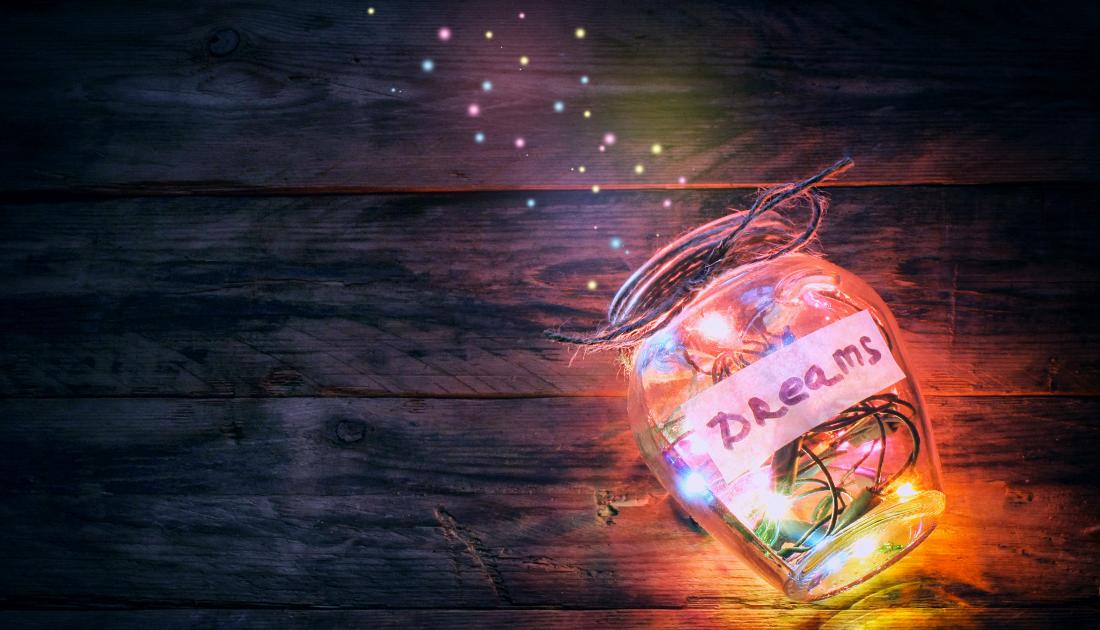 Dreams contain the images, stories, thoughts, and the emotions that our brain create when we asleep. Dreams can be emotional, confusing, or even boring. Some dreams which we see include joyfulness, while others are frightening or full of sadness.

Sometimes dreams seen by people have a clear narrative of a dream, while many others dreams appear make no sense at all. People spend almost two hours every single night dreaming but aren’t able to remember most of their dreams. Some of the brain experts say that we dream almost four to six times at a night.

Why we do dreaming

Evolutionary theory guides us the purpose of dreams is to learn, in a safe way, and teach us how to deal with challenging or threatening situations in our life. Whereas the recent memory consolidation theory guide us that dreams are a byproduct of rephrasing memory in response to what has been learned in all over the day. Both of theories have only one thing in common as in the times of stress and depression we either dream more or remember our dreams more often , as a way of dealing with challenging situations and new information.

Sleep cycle is during your sleep, sleep can make a single cycle where your brain progresses sequentially through each stage of sleep: wake, light sleep, deep sleep, REM, and repeat. Awake time is the time spent in bed before and after falling asleep. It also includes awakenings during the night. You’re unaware of what goes on while you’re sleeping, your brain and body are in an active state.

Each stage of sleep have the ability to restore health, and how you move through each phase plays a large role in your body’s status the ensuing day. As During an ideal night’s sleep, while sleeping you go through several 90 minute cycles that sample each phase of sleep. In our sleep each cycle plays an essential role in maintaining your mental and physical health. The amount of each phase of sleep can do alteration between nights and individuals.

Sleep has been divided into two categories: Rapid eye movement (REM) or Non-rapid eye movement (NREM. Both are exactly what they sound like, your eyes either move rapidly or remain still under your eyelids. Together, these two types of sleep make up a single cycle where your brain progresses sequentially through each stage of sleep: wake, light sleep, deep sleep, REM, and repeat.

Night sleep initiates your sleep cycle and acts as a transition to deeper sleep stages. During this stage your muscles are relax, your heart rate is also slow down. During light sleep muscles relax and may jerk, respiration slows etc. Deep sleep focuses on your body blood pressure drops, blood flow increases to muscles etc. During REM sleep, respiration increases, heart rate increases. Increase in deep sleep after a hard workout.

What happens to our brain when we dream?

Everyone see dreams, your brain stem’s nerve cells may fire erratically. Some of the experts believe that dreaming happens when the thinking part of the brain tries to make sense of these signals. Dream are strongest during REM sleep after deep sleep, your brain starts to perk, and its electrical activity starts to resemble the brain when brain is awake. In night it is the periods when most dreams happen. Because of it your muscles are temporarily paralyzed, and your eyes dart back, giving this stage its name, is called rapid eye movement (REM) sleep.

Parts of your frontal cortex, i.e., where your smarts lie, without reasoning, logic, or judgment, the normal rules of space and time don’t apply. For example, for one minute you’re sweating an exam for a class you never took. Dreams do engage the brain’s hippocampus, Most dreaming occurs during REM sleep. You can, however, have non-REM dreams, though they tend to be different, more mundane and less (only in your dreams). e.g.,driving a car versus winning the lottery.

In Short
What are the dreams?: Dream is a series of ideas and images that occur automatically during the sleep. Dream occurs when our brain is in the resting stage. Sleep makes a single cycle during the sleeping process and our brain progress sequentially through each stage of sleep. There are two categories of sleep:

Why brain needs to dream

There are numerous stories of people who’ve learned from their dreams or have been inspired by them. For example:

When we’re talking about why we dream, there are numerous theories. Freud believed dreams were the gateway to expertise the unconscious mind, our hidden dreams and underlying thoughts. His dream theory involved two parts: what was on the surface and what was under the surface.

Carl Jung, on the other hand, saw dreams as a way of expressing things openly, and believed dreams to be the psyche’s way of communicating important information. Jung devised “Dreams do not deceive, neither they tell lies, nor they distort or disguise. They are invariably searching for something to explicit that the ego does not know and does no longer understand.

A few of the benefits of dreaming are described as below:

Dreams can help you in Learning

Oftentimes we fall asleep being unsure about a decision we were trying to make and when we wake up the answer somehow becomes clear. We all must be aware of this expression “let me sleep on it”. This expression actually has a scientific evidence to support it that we do infact learn while we sleep. According to researchers at Harvard Medical School, if you learn a task and then sleep, you may be 10 times better at that activity than if you had stayed awake. Dreaming helps your mind make sense of latest information.

Dreams can be therapeutic too

Although whatever we’re facing in our dreams is not reality based and all the gains and losses that we see in a dream are nothing related to the reality, but still the emotions that go along with them can be quiet real and dreaming can help heal those emotions. A neuroscientist Matthew Walker conducted a study regarding sleep and dreaming and he concluded that when people go through an emotional event, this triggers the release of stress hormones which prioritizes that event in your mind. This is a reminder to your brain to work on it while you’re asleep.

This is mostly applicable to Lucid Dreaming. Lucid dreaming is dream where the dreamer is in control of his dream and can essentially manipulate or overcome his fears during a dream.

For example: A student who is hydrophobic, due to a traumatic past event finds difficulty in his swimming classes. He sees a dream where he finds himself swimming or achieving a position in some swimming contest. This dream will not only motivate him to start swimming but also would gradually overcome his fear by the continuous affirmation during the dream. 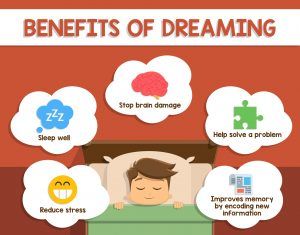 When are the dreams more likely to happen

There are lot of surprising facts of dream. Here, are only few:

In our dreams we only see faces that we already know (familiar faces):

It is proven that in a dream we can only see faces that we have seen in real life before.

People dream about six years during their lives on average.

Men see dreams like more of aggression and women see dream more of their conversation and clothing.

Dreaming plays an important role in in overall emotional, mental and physical well-being. Dreaming helps to tackle stress. Dreaming is a necessity and helps to recharge the mind and revitalize the body. Dreams help in overcoming symptoms of irritability, anxiety, quick tempered, lack of concentration, memory loss and over sensitivity. Dreams are important for surviving and thriving as they give insight into body, mind, and spirit. Through dreaming, we speak to ourselves, we guide ourselves through difficult situations, point ourselves toward what we really and truly need to love the life we are meant to live.

Summary
According to Freud our brain need dreams because dreams were the gateway to expertise the unconscious mind, our hidden dreams and underlying thoughts. Dream helps the individual in learning and overcoming fears. Dreams are more likely to happen in the course of rapid eye-movement.

Here are some frequently asked questions regarding what are the dreams.

What does it mean to have vivid dreams?

While we may consider any dream that we encounter in REM sleep “vivid,” with vivid dreaming, it’s used to explained a specifically intense dream that felt very real.

An expected 3% to 7% of adults can’t get rest because horrifying dreams wreak destruction on their sleeping patterns. Specifically bad dreams can be an indicator of mental health issues, such as post-traumatic stress disorder depression and anxiety.

In opposition to the rationalist theory that dreams aren’t real (“You’re just dreaming”), dreams are very much genuine. They pass on real data, real effect , genuine feelings, and have real outcomes if overlooked.

1. What are the dreams?: A dream is a series of ideas and images that normally occur automatically in the mind during sleep. Dreams can be emotional, confusing, or even boring. Sleep is divided into two categories: Rapid and Non-Rapid eye movement. Dreams occur only during the rapid eye movement sleep as when our brain is fully active and the person is sleep. But sometimes they can also happen when there is no REM. Sleep can make a single cycle where our brain progresses sequentially through each stage of sleep: wake, light sleep, deep sleep, REM, and repeat.

2. Our brain needs dreams because dreams were the gateway to expertise the unconscious mind, our hidden dreams and underlying thoughts. Dreams help us in learning, overcoming fear and they can therapeutic too. There are some facts about the dream such as dream drugs. Dreaming is important because dreaming plays an important role in in overall emotional, mental and physical well-being.