Perhaps no sport holds as unique a tradition or as unusual an evolution as that of rugby union. According to the lore of the game, what ultimately would become the 15-aside version of rugby was invented on the spur of the moment by William Webb Ellis at Rugby School in Warwickshire, England in 1823. As the story goes, frustrated at his inability to dribble the ball during a soccer match, Webb Ellis scooped up the soccer ball in his arms and opted to run with it, spawning a new game in the process.

Though this makes for a wonderful tale of creativity and inventiveness, much like the story of how Abner Doubleday is said to have invented the game of baseball, there seems to be far more fable than fact behind the legend of Webb Ellis. Nonetheless, his legacy has maintained a place in the annals of rugby history. Every four years, when the Rugby World Cup champion is presented with the cup, it is the William Webb Ellis Trophy that they receive. 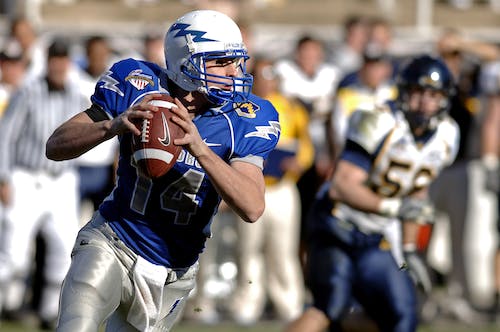 By 1863, a number of British boarding schools and clubs were playing rugby and these groups set out to establish a standard set of regulations to govern play of the sport. The Rugby Football Union was officially formed in 1871 and that same year, Scotland and England contested the first international rugby match. In 2023, the next Rugby World Cup will be contested in France. South Africa are the reigning world champions and there are already odds in place for the 2023 Rugby World Cup that can be accessed at sites such as mytopsportsbooks.com.

Though rugby union was an Olympic sport from 1900-24, it wasn’t until nearly the end of the 20th century that it became a fully-fledged professional game. Rugby union maintained its amateur standing for decades. Players that wished to earn a living from the game turned to the rival rugby league, a sport that more closely resembles American football, with downs allotted to teams to get the ball across the line for a score.

To the untrained eye, rugby union can seem to be a vastly complicated and extremely violent game. In fact, World Rugby, the governing body of the sport, describes rugby as being “simple . . . but complex.”

In truth, it is governed by a straightforward philosophy - that neither side in a match may take any action that would offer an unfair advantage to their club on the pitch. Blocking is not permitted and even accidental obstruction will be penalized. Any hits above the shoulder will result in immediate expulsion from the match of the offending player.

The Laws Of Rugby

Interestingly, rugby isn’t governed by rules, but rather by laws. The game often seems to be a contradiction in terms. As you move forward, the ball is passed backwards. The ball can be kicked forward, but the kicker’s teammates must be behind the ball at the moment the ball is kicked and cannot pursue the ball until passed by the kicker and placed in an onside position. Players are never permitted to participate in any play from an offside position.

The game of ruby is essentially about the creation and use of space. The winners of a will be the team of players who can get themselves and the ball into space and use that space wisely, while denying the opposing team both possession of the ball and access to space in which to use it.

A player may pass to a teammate who is in a better position to continue the attack, but the pass must not travel towards the opposing team’s goal line. It must go either directly across the field, or back in the direction of the passer’s own goal line. Players must receive a pass cleanly. Any mishandling of the ball that results in it being knocked forward will be penalized with a scrum. The rival forward packs from both teams bind together at the spot of the infraction and seek to push each other off the ball when it is fed into the scrum by the non-offending team.

Any foul play is penalized. Deliberate or persistent foul play may be penalized by sentencing a player to the sin bin - leaving them to play a man short for the next 10 minutes - or by expulsion from the match.

How to play rugby

The game is played with two teams of fifteen players each. Both teams can then pass or throw the ball into the finish zone to score as many points as possible. The team with the most points wins the game.

The two teams competed in two forty-minute halves with five-minute halves. The referee controls the game with the help of two referees. There is no extra time out, except at the discretion of the referee, if time allows, an injured player decides whether to continue the game.

Each team can make up to seven substitutions per game. Six substitutions are at the discretion of the team, and one in seven is due to injury. After a player has been replaced, he can no longer join the game. Players will only be able to return to the game if they have been temporarily modified due to blood injury. However, it must be permanently returned or replaced within ten minutes after replacement.

The game starts with a hit from the middle of the field. The team in possession of the ball will do its best to try it while the ball is in play. A trial is made when a player places the ball in the opponent’s goal. This team will score five points. After an attempt to score a goal, the team has the opportunity to score by kicking the ball over the opponent’s crossbar and between the goal posts and scoring two additional points, known as the conversion point. The ball must hit the position where it was touched, in a perpendicular line. If the opposing team commits a penalty at any time, the offending team may attempt a three-point penalty in the form of a goal or kick from anywhere on the playing court.

During the game, the player advances to the goal. However, he cannot throw the ball forward. Players must return the ball to their teammates while moving forward. The progress of the player holding the ball may be hampered by that player being immobilized. When a player is attacked, he must immediately pass or release the ball and move away from the ball.

So who is the best rugby player in the world right now?

This is a question that often invokes a lot of controversy when asked, and today it is no different.

It is inevitable for players to be on the agenda for a period of time due to the epidemic and especially now that rugby is taking place in some countries more than in others.

It is also a very personal and casual exercise.

Williams grew up in Brisbane and played in rugby and rugby league. The young Australian star considered playing for the Brisbane Broncos in the National Rugby League before focusing on a career in athletics.

Known as “Quadcilla”, he is currently the fourth fastest Australian at over 100 meters, reaching 10.1 seconds during the 2018 Australian Athletics Championships.

This time he put Williams in front of the US rider Carlin Islands.

With the success of his fellow running in the sport, Williams should feel the encouraging signs that he is ahead of a promising career at just 22 years old.

Q: Where is rugby played?

It is the national sport in New Zealand, Wales, Fiji, Samoa, Tonga, Georgia and Madagascar and is the most popular rugby sport worldwide.

Q: How many calories do you burn playing rugby?

Rugby Like American football, rugby is a contact team sport with lots of running and rapid changes of direction. An excellent team sport to improve strength, bone density, flexibility and the body’s cardiovascular system. One hour in the garden can burn more than 750 calories.

Worldwide rugby leagues Rugby League is played in more than 70 countries around the world. 7 countries - Australia, Canada, England, France, New Zealand, Papua New Guinea, and Wales - have teams that play on a professional level, the rest being semi-professional or amateur.

Q: Is it safe to play rugby?

Like any sport, rugby isn’t without risk - but good warm-ups, cool-downs and tackling technique all help to minimise any dangers. According to Sports Medicine Australia, there are around 16 injuries for every 1,000 hours of rugby played by schoolchildren.

Q: What is the most dangerous rugby position?

The most dangerous position on the rugby field is hooker. The findings were published last week in a three-year medical study commissioned by the LNR (Ligue Nationale de Rugby) and FFR (Fédération Française de Rugby) listing all mandatory rugby union injuries. during this time.

Q: What is the easiest rugby position?

High bow, we would say that the wings are the easiest. By default, as a left wing, the winger does not have to catch the ball during attack and can compensate for a good 15,9 and 13 cover-kick and cover-kick.

Rugby is a sport played in 7 countries. It is a running game and you can burn a lot of calories by playing it. rugby has some hard as well as easy positions.