This archaeological site of immense historic importance is situated in the present day Rome, a city of volcanic Mount Vesuvius.
It was due to the volcanic eruption from the Mt. Vesuvius that devastated the entire city; that lay ■■■■■■ under a thick layer of ash and pumice.
In the result of this destruction the entre inhibitors of the city died at the spot.
After the centuries the archaeologists were able to dig out some precious information along with the bodies of the people and animal those were once living in Pompeii.
This sad event took place on August 24, 79 CE. For long the bodies lay preserved under the ashes, as why they did not come in contact with the air.

At the time of its destruction the population of the Pompeii was lying between ten to twenty thousand people.
The city was first mentioned 310 BCE in the history.
The city is included under the UNESCO world heritage list.

The bodies of the people who were trying to escape from the gases and ashes of the volcano were found in the houses and the streets, in a much preserved state.
From Pompeii some very well surviving structures were recovered including an impressive forum and an amphitheater.
Beside that lavish villas and houses were also found, they are dated back to the 4th century BCE.
Bakeries along with the ovens still containing loaves that were kept for baking were also found from Pompeii.
The shape of the city is irregular, due to the construction of the structures on a pre historic lava flow.

Rosette stone was found accidentally in 1799 by a French officer Pierre-Farancois Bouchard, in the times of the Napolean’s campaign in Egypt .
It was found in the fort of Jullien that is situated in the town of Rasid or Rosetta in the delta of the river Nile.
Here it was used as a construction material.

The Rosetta stone is actually a Granodiorite stele kind of rock stone.
It contains the order issued by the king Ptolemy V Epiphanes the fifth ruler of the Ptolemaic dynasty in circa 196 BC.
It was actually used to display in a temple near Sais , which is an ancient Egyptian town in the western Nile Delta.
Later it was removed from there and was taken to the fort Julien , probably in the Mameluk period.

The Rosetta stone is about 3 feet by 8 inches high, 2 feet by 5.8 inches wide, and is about 11 inches thick.
It weighs about 760 kilograms.
While the frontal part of the stone, bearing the engraved script is polished. 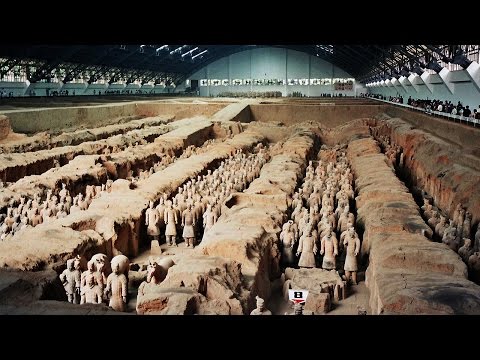 One of the most amazing archaeological discoveries, is the tomb of the of the China’s first emperor Qin Shi Huang.
The unusual thing that was found inside the tomb was an army of terracotta warriors; those are found standing inside the tomb.
The aim of producing the army of terracotta was to guard the tomb of the king.
Something that is jaw dropping is that, that the terracotta soldiers are thousands in the number.
Each one soldier is created in life size. The molded parts were fired. Then were assembled and painted.
Each one is created with the minute details of the face and dresses from head to toe.
This is not the end, besides the army of thousand; they have also created terracotta horses and chariots inside the tomb.

The site is located in Lintong District Shaanxi, China.
The tomb of the king Qin Shi Huang is dated back from 246-206 BC.
It is a speculation that there were some 720,000 builders or the workers who were employed to construct the tomb along with the terracotta army and horses.

The terracotta army was discovered for the first time in 1974 accidentally by the local farmers. After the investigation the archaeologist got that know that the terracotta army is associated with a necropolis.
A decision was taken to convert the whole site into a museum. After that decision a museum was constructed at the site.

The terracotta army of thousands warrior is a part of some extensively large necropolis.
After a scientific survey the archaeologists got that know that the entire area of this complex is approximately 98 square kilometers.

The most important prehistoric site of the world Olduvai Gorge is located in Tanzania Africa.
As far as the human evolution is concerned there Olduvai Gorge is a valley that has helped a lot to the paleoanthropologist and the archaeologist to develop the links of the ■■■■ sapiens with the extinct species of the ape man.

Olduvai Gorge is the first place on earth from where the earliest evidences of the stone tools were found.
It is the most important site of the world regarding the study of the human evolution.
As the earliest specimen of the ape man settlements are found from here.
Louis and Mary Leakey have made some incredible discoveries in this valley; that belongs from the early humans of the world.
That helped historians to understand the stone tool making ancestors,their daily life routines, food and envoirment over the last two million years.

The Easter Island stands in the isolation some 1200 miles to the east of Pitcarian Island and about 2200 miles west of the Chile in the Pacific Ocean.
The Easter Island is famous for its monolithic giant Moais (a Spanish word for statue).
The island has been declared world heritage site by UNESCO in 1995.

The monolithic human statues that are installed in the Easter Island were carved by the Rapa Nui people in between 1250 to 1500. It is said that these were carved in a quarry located in the Rano Raraku located on the same island.
Many are still there in the quarry, but hundreds of theses moai were brought here and were placed on a platform near the island’s perimeter.

There are about 900 giant statues carved out of a monolithic stone on the Eastern Island.
Their transportation from a quarry and then the installation has confused the archaeologists. The tallest of these statues, measured about 10 meters high and it weighed some 82 tons. While the heaviest of these statues, is about of 86 tonnes in weight.
The size of the head in relation to the trunk is three to five in ratio.

The overly large heads of Easter Island show that the ancient Polyesians valued the large heads, in the sense of braveness or the tribal superiority.
The ■■■■■■■■ of such huge monolithic statues also symbolizes to the authority and power.

Charles Masson was a soldier who was serving in the British Indian army.
In 1829, he was the in charge of the railway work that was in the progress in Punjab, at the city of Montgomery now known as Sahiwal, situated in the Northern Punjab Pakistan.
During this work he found some clay bricks below the ground.
It was a biggest discovery as at that time but at that time they did not know that they have found one of the top urban cities of the IVC known as Harrapa.

• Division of the Sites:

• Division of the Periods:

The sites of the Indus valley civilization are divided in three groups chronologically.

The Harrapan phase is further divided into three periods.

• Important Sites of the IVC:

Here is the list of some of the important sites of the IVC ;

Ajanta caves are situated in Aurangabad district of Maharashtra in India.
There are series of 30 rock cut Buddhist sanctuaries that were created in the time period between 2nd century to 480 century BC.
The mural art and rock cut sculptures in theses caves are considered as the world’s best surviving example of the ancient Indian art.
These caves are the outstanding piece of art and architecture as these are carved out from a single piece of a rock.

Some beautifully created mural paintings are found preserved in some of these caves.
They have employed the dry fresco technique to create paint work.
At some instances the ceilings of the cave have found painted as well.
This art work provides a glace to its spectator into the life culture of the ancient India that was prevailing between 2nd to 5th centuries BC.
These paintings contain realistic life stories of the Buddhists. The artists have tried to achieve three dimensions in the art.

The sculptures of the Ajanta cave are proved to be equally exceptional.
The sculptors have produced some master pieces that are full of elegance.
The faces and limbs of the sculptures are carved softly and in rounded form, showing naturalistic details.

The historic sanctuary of Machu Picchu is situated in southern Peru, some 2430 meters above the sea level.
It was constructed in about 15th century.
The whole area where the site is situated is enveloped within a tropical mountain forest.
The sanctuary is a work of the Inca Empire that shows their excellent skills and command in the field of the art and architecture.
The site was abundant in the 16th century at the time of the defeat of the Incas by the Spaniards.

The complex is constructed on the mountain ridge is like a citadel in appearance.
The site is comprised different structures including religious, ceremonial, agricultural and astronomical buildings.
There is a large square piece of the land that separates the two parts of the city from each other; the one is the residential area while the other is the farming land.

The acropolis of Athens was constructed in 5th century BC in Greece.
That was constructed under the guidance of the great general Pericles of Athens.
The main aim behind the construction was to honor the goddess Athena and also to show the glory and superiority of the Athens to the world.
According to the historians hundreds of the craftsmen, artisans, metalworker, painters, and artists along with the labor were employed for the construction of the acropolis.
The acropolis marks the Greek legacy of the classical era.

Located in the modern Turkey, the site is of immense

The site was discovered in 1990’s and is about 10,000 years old.
The clues of the hunter gatherers were found at the site are dated back from 10th or 11th millennium BC.
Gobekli Tepe is situated 9 miles northeast of the town Urfa in the southeastern Turkey.
Now archaeologists are of the view that this site is the Zero Point in the history of the human civilization.

The site basically belongs from the earliest Neolithic era. It was a society of the hunter and gatherers. Still at the Gobekli Tepe very little evidences of permanent inhabitance are found.

The site was excavated in 1994 for the first time by the Istanbul branch of the German archaeological institute.

The site is composed of a 1000 foot diameter mound, located at a mountain ridge. There are some 20 oval or circular structures that are built with the help of four arrangements of the monolithic pillars, which are linked with each other with the help of the dry stone walls.
Each of these complexes is having one large pillar in the center.
That is further encircled by smaller stones.
These pillars were probably supporting the roof of the structures.
These T- shaped monoliths are the world’s oldest monoliths.
Total numbers of 200 pillars were used over all in these constructions.
The floor of these structures was paved with the Terrazzo, a kind of a burnt lime plaster.

• Nature of the Structures:

The archaeologists still have not come to any conclusion that what these structures were actually used for.

Here are few frequently asked questions regarding the archaeological discoveries of the world.

It was 1799 when a French soldier in the port city of the Rashid Egypt found an immensely important artifact Rosetta Stone. This contains the bilingual carving of the king’s orders. The discovery of the Rosetta stone helped to translate the Egyptian Hieroglyphs.

There is a prehistoric site in Kenya known as Lomekwi 3. Archaeologists have found there the world’s oldest stone tools that were actually made some 3.3 million years before.