Archaeology is a science that deals with the study of the past human remains, by analyzing the cultural material from the past. There are many disciplines that come under the umbrella of archaeology. Like geology, anthropology, biology, zoology, envoirmental sciences etc. Some time archaeology is also considered as a branch of the socio-cultural anthropology. Anything like ecofact, artifacts, structural remains etc that are recovered from a historic site are studied for the reconstruction of the past.

The word Archaeology is driven out of two Greek words,” Archaios” means old and “logia” means study. So it is a study of the past; about the people who were living in the era million of the years ago from the present time.

How does archaeology works?

Archaeologist study of the past humans activities, from the time when the first stone tool was struck by a man. So the Stone Age is the time period from which begins the work of the archaeologists. Their entire work is based on the excavation. As a result of the excavation a cultural stratified deposit exposes from a historical site.

That we get a face of million of the years in one thick deposit of the clay. Each artifact that is embedded in a layer is carefully recorded in situ. Archaeologist continues to dig a trench until the arrival of the virgin soil. Each strata is studied in a single unit to bring the out as maximum information from the stratigraphy as possible.

An archaeologist is a person who is qualified from a certified university in the subject of Archaeology. They are responsible for excavating a site and recording and collecting the past human cultural remains. That is the way they reconstructing the whole story of an archaeological site with the help of these material remains. They also take help of the other subjects’ experts to study the artifacts.

The Fundamentals of Archaeology:

Following are the fundamental steps that are part of the archaeology;

As mentioned before, archaeology is essential to understand the past of the human societies, and the development stages of the human races. The truth is that, that 90 percent of the human past is associated with the Stone Age. It is the era in which we do not find any written record. This makes it so intricate to understand the ancient societies and their life style. So this is the only way to understand the past human culture is archaeology. Archaeology sheds light on the human capabilities, that how in different times man developed mentally in the field of religion, art, metallurgy, technology and agriculture etc. Simply without the help of the archaeological excavation and exploration, the world would not aware about their ancestors.

Archaeology not only helps to understand the pre literate cultures, but it has helped a lot in reconstructing the history of the historic and the literate eras. This is another sub discipline of archaeology known as historic archaeology. The reason is so obvious. In the literate societies, like Indus valley and the Mesopotamian civilizations like Babylonians and Sumerians, although there was a use of literature and script in the form of clay tablets or manuscripts. But it is seen that as these civilizations are thousands of the years old, so this their written records have gone extinct, or there is a lack of information in the literature regarding their past.

So in this case archaeology helps a great deal to add the missing links or the pages in their past. Then it has observed that in the ancient societies only elite or the ruling class could enjoy the system of education, so it was confined to them only. This is the reason that the information regarding the other classes of the society go missing. The only way to get informed about all of the civilization is the archaeological excavation. 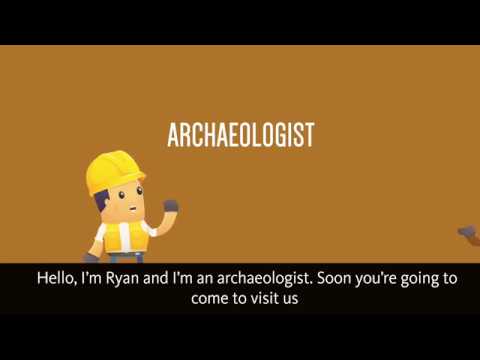 Those archaeologist who need to research on the past human remains their study come under bioarcheology.

Those researchers in this field, who want to study the animal bones and about the presence of the certain species of the animals their study comes under zooarchaeology.

The study and research on the extinct plant species of the different families comes under the field of Paleoethnobotany.

The study of the stone tools and stone tool industries and their technique of making is studied under the lithic archaeology.

It also helps to find differences in the vegetation health, which is a clue to find if anything that lies buried beneath the soil.

As the name shows this is a study of those ancient remains that discover underwater in the seas and oceans. This is quite interesting group of archaeology. Underwater archaeology leads to the discovery of the ancient cities, ships, hoards of coins and gold, temples or even sculptures etc that were once got sunk under water in the due to a natural disaster or an accident.

Archaeology and its relation with Anthropology:

In Europe Archaeology is taken as discipline of its own right, while in America it is considered as a sub discipline of anthropology. Anthology is a scientific study of the past human species and human behavior, their societies, norms, and values in the present and past. So anthropology as is concerned with the study of the human’s behavior; and the equivalent things are studied in the archaeology to reconstruct the entire scene of the past human culture. So in this case, archaeology is definitely linked or is dependent on anthropology.

Archaeology is not related with the Paleontology. Paleontology is a study of the fossil remains. It is a science in which we study the life of the organisms that were living in the beginning of the Holocene era. So archaeology might help to disclose or discover the new species of the organism accidentally but their archaeology is purely concerned with the study of the past human culture.

Any place that contains the past human remains or the artifacts comes under the category of the archaeological site. It does not mean that an archaeological site has to be enough large or it must lie at some abandoned place. If there is a place which kept occupied by a small number of people just for a little time, still there is a potential to find some remains. Besides there are such large urban areas and villages that are so ancient and are hidden under the ground, that need to get exposed. There area is quite large in square kilometers. An archaeological site could lie anywhere on the earth or below the sea, upon a mountain or inside a rock shelter.

Types of the Archaeological Sites:

Following are some of the important types of the archaeological sites;

Value of the Artifacts, Features and Eco facts:

Anything that is made by a man with his own hands comes under the category of the artifacts. The artifacts that are left behind by an ancient man are immensely important to know the life values and living style of the author of that epoch. Similarly important are features. Features are the non portable remains. Like the houses, granaries, temples etc. Such structural remains help a lot to understand the rituals and again the life pattern of certain particular society. Ecofacts are those remains that are natural. Like plants or gains that were under the use of an ancient man. Their study brings forth the knowledge about the agricultural activities and the technologies the ancient man had used.

Recording an artifact in situ means recording the artifact at the exact place it is located before removing it from the place it is found. If an artifact does not record in situ, we lose the context forever. And as such the artifact lose its value for forever. As it is not known about the layer of occupation from where it is recovered. So removing an object without recording it in situ can lead to great disturbance. As such archaeologist would not be able to understand the relationship of the artifact with the archaeological site.

Is Archaeology a Science?

Archaeology is usually comes under a social science. Further it is also consider a branch of humanities.

What are the disadvantages of the Archaeology?

In one way when an archaeological site is not excavated; it is actually reserved. When an archaeologist excavate, this destroys a recorded that is embedded for centuries at site. If the things are not recorded scientifically then there are more chances of losing precious information for forever. That is why sometimes large scale sites are left unexcavated; only after recording essential information from a limited one season excavation. So to keep the site preserved for the future archaeologist in the hope that they will bring with them some new technologies.

Skills needed to become an Archeologist:

Duties of an Archaeologist:

The duties of an archaeologist include;

What are the Technologies use in Archaeology:

All of these technologies help measure some features of the ground below the super facial layer. It is now possible for the archaeologists to gain the underground information without digging up the soil.

What is a Difference between Archaeology and Archeology?

There are two spellings for the archaeology. One is “archaeology” while the other spelling is “archeology”. Both are correct.

Archaeology as a Career:

In the countries that have a rich cultural history. There is a great scope of the archaeology. After gaining a degree of archaeology from a certain university. Anyone who has a post graduate diploma may apply for the post of lecturer in the college or an institute.
Further with this degree you can start working as a curator in any government or non governmental history museum.

After the M.Phil. and then PhD degrees, archaeologist gets higher ranks in the field of teaching. Any senior professor or assistant professor of archaeology has a lot more of chances to apply for the post of the “director of archaeology”. If he has completed all of the research papers that are required for this post. Then there are regional departments on the provincial level in some countries , like in case of Pakistan. These posts of the provincial archaeology directorate and its sub ordinate posts are also occupied by the capable archaeologists.

Different NGOs and international bodies like UNESCO that work for the preservation of the heritage and culture along with the tourism, are also in seek of the archeologists for their office.

List of the Common Jobs Available for the Degree Holder in Archaeology :

Eras/Periods those are Discuss in Archaeology:

Following are the frequently asked question regarding archaeology;

1. When was archaeology invented?

It was 15th and 16th centuries when the people started taking interest in collection of the humanism. The elites of the Renaissance collected antiquities from the Rome and ancient Greece.

The earliest evidences of the archaeology are found from the 18th century Egyptian dynasty who took interest in the reconstruction of the Sphinx circa 1550-1070. While the first modern archaeologist is Jon Aubrey, Who investigated on the Stonehenge situated in England in around 17th Century CE.

The main goal of the archaeology is to find the life style of the ancient societies, and then explaining the evolutionary changes that are followed in a span of thousands of years. Archaeology is based on a multi Disciplinary or cross disciplinary research. It relies on other disciplines to come to a certain truthful conclusion.