Using the periodic table, you can classify the elements in many ways. One useful way is by metals, nonmetals, and metalloids. The periodic table is organized in families and periods.

In the periodic table, you can see a stair-stepped line starting at Boron (B), atomic number 5, and going all the way down to Polonium (Po), atomic number 84. Except for Germanium (Ge) and Antimony (Sb), all the elements to the left of that line can be classified as metals.These metals have properties that you normally associate with the metals you encounter in everyday life.

All these metals tend to lose electrons easily. The following figure shows the metals.

Except for the elements that border the stair-stepped line, the elements to the right of the line are classified as nonmetals (along with hydrogen). Nonmetals have properties opposite those of the metals.

The nonmetals are brittle, not malleable or ductile, poor conductors of both heat and electricity, and tend to gain electrons in chemical reactions. Some nonmetals are liquids. These elements are shown in the following figure. 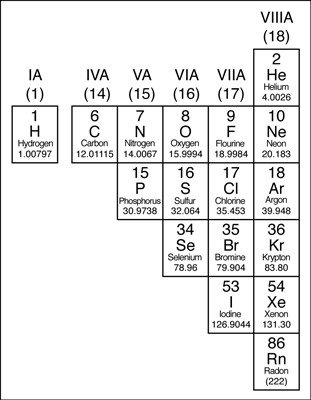 The elements that border the stair-stepped line are classified as metalloids. The metalloids, or semi metals, have properties that are somewhat of a cross between metals and nonmetals.

Metalloids tend to be economically important because of their unique conductivity properties (they only partially conduct electricity), which make them valuable in the semiconductor and computer chip industry. The metalloids are shown in the following illustration. 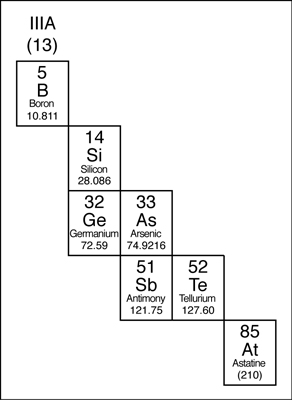 What Is The Periodic Table: Families and Periods
Why Fluorine is the most reactive nonmetal?
How Many Ounces in a Gallon of Water?
Zulal_Naveen November 3, 2020, 9:07am #2

The discussion over the study of the Periodic Table, the distribution of the elements on the basis Metals, Non-Metals and Metalloids and their General Properties is being discussed in the main article. In the below write up I’ve tried to give a detailed yet elementary look into the Periodic Table and their elements.

The tabular arrangement of the elements according to their atomic numbers so that elements with similar properties are in the same column.

Now the question that arises here who holds the crown to the emergence of Idea of arrangements of these elements?
In the history of the periodic table, Döbereiner’s triads were an early attempt to sort the elements into some logical order by their physical properties, that was reported in the 1817. After that Newland’s Law of Octave became the heir of the arrangements of elements according to their increasing atomic masses and repeated properties of every 8th element, in year 1865. This title of the most appropriate arrangements of the elements was about to be crowned to Lother Meyer’s Classification but Mendeleev’s Periodic Law that “properties of the elements are the periodic function of their atomic masses” laid its hold on it which was presented in th esame year as of Lother Meyer’s Classification in year 1869. To this date the extensively accepted Periodic table is Modern Periodic Table that is formulated as “ The properties of elements are the peiodic functions of their atomic numbers.” Which was presented by Mosley in 1913 as it encountered most of the objections that were reported in the Mendeleev’s Classification.

Why do we need Periodic Table?

To summarize, the periodic table is important because it is organized to provide a great deal of information about elements and how they relate to one another in one easy-to-use reference. The table can be used to predict the properties of elements, even those that have not yet been discovered.

Elements having any of various opaque (through which light cannot pass), fusible (those which can be liquefied by heat), ductile (one that can undergo significant deformation before failure), and typically lustrous (shiny) substances that are good conductors of electricity and heat, form cations (positive ions) by loss of electrons, and yield basic oxides and hydroxides. Metals are solids at room temperature with the exception of mercury, which is liquid at room temperature (Gallium is liquid on hot days).

They are elements or substances that are not a metal. The one’s who are lacking the properties of the metals. Nonmetals are (usually) poor conductors of heat and electricity, and are not malleable or ductile; many of the elemental nonmetals are gases at room temperature, while others are liquids and others are solids.

They are elements intermediate in properties between the typical metals and nonmetals, a nonmetal is that can combine with a metal to form an alloy. Metalloids can also be called semimetals. Elements: Silicon; Boron; Arsenic; Antimony. Physically, they are shiny, brittle solids with intermediate to relatively good electrical conductivity and the electronic band structure of a semimetal or semiconductor.

To sum up, the periodic table of elements is an extremely important tool that is a fundamental piece in any laboratory, classroom, or hospital. The periodic table has an endless array of benefits; it allows one to easily find an element, predict their properties even before their discoveries. It works somewhat like what we call Lesson Plan, or the way you organize your day or let’s call it the Timetable of Elements.

Is Aluminium A Metal