How to Build Circles and Spheres in Minecraft

In a world where everything consists of squares and cubes, creating anything that’s perfectly round in your Minecraft world is impossible. But if you have your heart set on circles or spheres, here’s a trick: You can come close by stacking blocks.

Building a circle relies on techniques similar to those used when building with slanted lines — you make both with small segments of blocks. 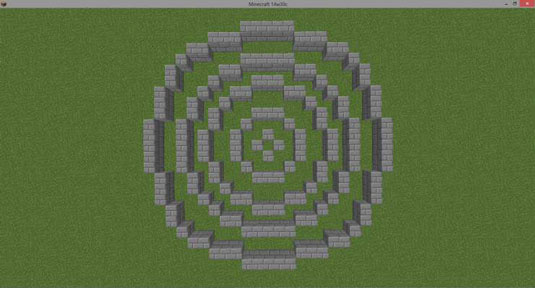 Even though you can’t get a truly round circle, any rounded room tends to have the same effect.

Spheres are much trickier to build than circles — it’s a lot more difficult to estimate a three-dimensional rounded object than a flat one. However, there’s a clever way you can build a sphere:

Spheres can be used for all sorts of things — dome-shaped roofs, balloons, and blimps are just a few. Three-dimensional rounded objects are useful for making structures smoother and more elegant.

How Far Apart are Cornhole Boards?