1.1. Electricity
It is not easy to define electricity.
– Electricity may be defined as a form of energy. It involves making and using energy.
– It may also be defined as a way in which materials behave.
Sometimes people use the term ‘electricity’ as the name for a material that flows through a
solid wire, motion of this strange material is called electric current.

1.2. Electron Theory
– An element is defined as a substance which cannot be decomposed into other substances.
The smallest particle of an element which takes part in chemical reaction is known as an

atom
– All matter is composed of atoms which are infinitesimally small.
– The atom, itself, is composed of electrons, protons and neutrons. The number and arrangement of these particles determines the type of atom : oxygen, carbon, copper, lead or any other element.
– Weight, color, density, and all other characteristics of an element are determined by the
structure of the atom. Electrons from lead would be the same as electrons from any other
element.
– The ‘electron’ is a very light particle that spins around the center of the atom. Electrons
move in an orbit. The number of electrons orbiting around the center or nucleus of the
atom varies from element to element. The electron has a negative (–) electric charge.

– The ‘proton’ is a very large and heavy particle in relationship to the electron. One or more
protons will form the Centre or nucleus of the atom. The proton has a positive (+) electrical charge.
– The ‘neutron’ consists of an electron and proton bound tightly together. Neutrons are
located near the centre of the atom. The neutron is electrically neutral ; it has *no electrical charge. 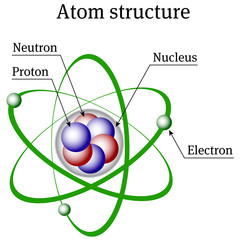 – In order to have electric current, electrons must move from atom to atom (Fig. 2). There are quite a few substances in which it is relatively easy for an electron to jump out of its orbit and begin to orbit in an adjoining or nearby atom. Substances which permit this movement of electrons are called conductors of electricity (e.g. copper, aluminium, silver, etc.)

Fig. 2. Current : Flow of electrons within a conductor.

Refer Fig. 3 (a). The electrons of copper are free to drift in random fashion through the copper.If an imaginary line is set up in the copper wire, it will be found that the same number of electrons will cross the line from both the directions. This random movement however will not result in electric current.

Fig. 3. (a) With no voltage applied : Electrons drift aimlessly.

A controlled drift of electrons takes place.
Current is the rate at which electrons move. One ampere (unit of current) represent 6.28 × 1018 electrons passing a point each second (1 coloumb past a point in 1 second). A moving stream of positive charges also constitutes an electric current, and in the case of flow through ionized gases and electrolytes the current consists partly of positively charged particles moving in one direction and partly of negatively charged particles moving in the opposite direction.

(Fig. 4). In all other cases the electric current consists of solely of moving electrons.

One ampere is that constant current, which if maintained in two straight parallel conductors
of infinite length, of negligible circular cross-section and placed one metre apart in vacuum, would produce between these conductors a force equal to 2 × 10–7 newton per metre of length.
Note. Those substances whose atoms have their outermost orbit incomplete act as good conductors of electricity i.e., they permit an easy detachment of their outermost electrons and offer very little hinderance to their flow through atoms. Such substances are known as good conductors. But substances whose electrons are rigidly attached to their atoms are termed as bad conductors. Materials like germanium, silicon, and silicon carbide whose resistances at ordinary temperatures lie in between those of typical metals and typical insulators are called semi-conductors.

1.4. Electromotive Force and Potential
Electromotive force (e.m.f.) is the force that causes a current of electricity to flow.
– If we have two compressed-air storage tanks, one of which is at a higher pressure than the other, and we connect the two tanks together by means of a pipe, air will flow along this pipe from the higher pressure tank to the low-pressure tank. The force that causes this current of air to flow is the pressure difference between the two tanks.
– Similarly, in the zinc-copper voltaic cell, the zinc and copper electrodes both contain vast quantities of electrons, but owing to chemical action the zinc electrode is charged to a greater electron pressure than the copper electrode. The electron-pressure difference is the electromotive force that causes the flow of electrons from the zinc electrode to copper
electrode through the external connecting circuit. The term electron pressure, although descriptive, has no social standing. The word potential had been used to express the same idea for several years before the development of the electron theory. Two conducting bodies are said to be at the same potential if there is no flow of electric current between them when they are joined together by a conducting wire.

1.5. Resistance
Some materials have an abundance of free electrons, which require a low pressure to move them from atom to atom, and establish a high current. Such materials are known as good conductors. Other materials have few free electrons. In these the same electric pressure can move only a few electrons from atom to atom, establishing a low current. These are considered poor conductors. The progressive motion of free electrons is hindered in all materials, because they collide with atoms of the substance used. The opposition to flow of electrons (due to bonds between protons and electrons, as well as to collisions) is called electrical resistance (R). Resistance may also be defined as ‘‘*The property of the electric circuit which opposes the flow of current .
Resistance is analogous in most of its aspects to friction in mechanics or hydraulics and, like friction, results in heat generation. The heating of an electric iron or stove is due to the resistance of the heat-unit conductor materials. For safety the material and cross-section of the conductors must be such that the temperature is kept well below a value which would result in damage to the conductor or its protective coating of insulating material.

1 Like
When Was Electricity Invented?
Delta Airlines
How Long Do Water Heaters Last?
Toroid
What do mice eat
Vystar routing number
Does Walmart Cash Checks?
Elon Musk Birth Chart
How To Reset Frigidaire Oven Control Board?
True up accounting
Is drain cleaner an acid or base
Can I put My Electric bill in someone else Name
Who Owns the Washington Post
200 amp service wire size
How to find formal charges?
Fastest Ferraris
Who Is John Galt?
MacKenzie Scott