Sudoku - How To Play Sudoku

I will be showing the most basic to not so basic methods,trick and tips to finish a sudoku.this instructable is for anyone who plays or wants to play sudoku even if you don’t know how to play.

I’ll start with the basic thing and progress to the less basic things. 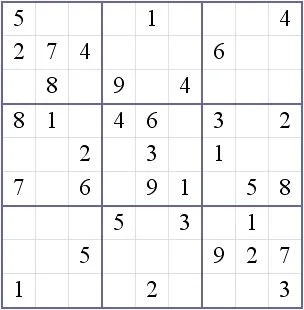 Step 1: How to Play Sudoku

The objective is to fill a 9x9 grid so that each column, each row, and each of the nine 3x3 boxes (also called blocks or regions) contains the digits from 1 to 9.

A cell is the smallest block in the game. A row , column and region consists of 9 cells and the whole game consists of 81 cells. A region has thicker lines surrounding it. This simply makes it easier to play the game.

I most basic strategy to find missing numbers is scanning and it consists of
1)Cross-hatching.
2)Counting.

2)Counting. In counting you simply count all the different numbers that’s in a row,column and region that connects to one cell. if there is just one number missing then thats what should be in the cell. Take a look at the second picture and see if you can figure out the missing number in the green cell.

the correct answer is :4

legend: green = result
red = cause(the cause of the result that is) 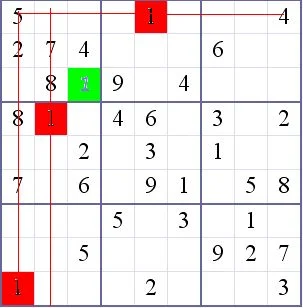 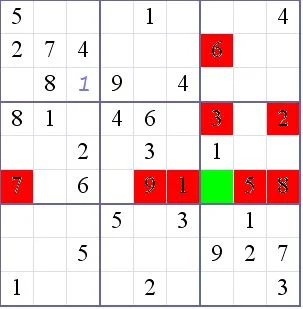 Step 3: The Analysis Is a Higher Level Method

Analysis consists of two methods namely candidate elimination and the what if.

I will not be showing the what if to you because i don’t like it. It’s slow progress and i don’t like to erase that much.

Take a look at the picture. I have concluded(with the help of cross hatching) that 7 and 8 can only be in two places in the lower left region(i filled both in) . The two cells which 7 and 8 can be in is in the same column, thus it cannot be elsewhere in the column. There is two other blank cells in this column and the missing numbers is 9 and 3. We can see that 3 can not be in the ‘middle’ open cell. This means 3 is in the top cell(marked green) and 9 is in the ‘middle’ cell.

Candidate elimination can also be used with three number in three cells.

*note: Candidate elimination is note the fastest nor easiest method for for finding the green cells answer. That is why one must first scan before analyzing . I will try to find a better example.

This one is almost like the candidate elimination i showed you in the previous step(its called deriving certainty from uncertainty). 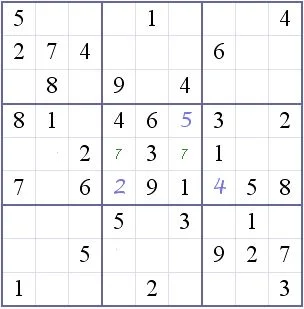 Step 5: Xy-wing(This Is an Advanced Technique )

You’ll understand better if you check the pics. It works by removing candidates.

the values in the blue squares will be assigned an x,y,z according to the numbers. In this instructable x=8 ; z=2 ; y=9 The green square with the redlining around it is a buddy(in the same row,column or region) of the blue block with 8,9 and the blue block 8,2. and the 9,2 blue block is an buddy of the 8,9 and 8,2 blue blocks. This means that 8(which is also in the two blue buddy blocks). cannot be in the red lined block. If your not sure why check the next picture. 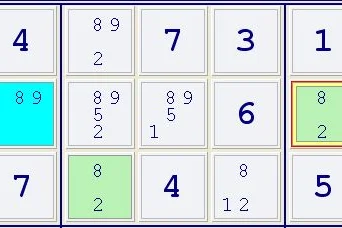 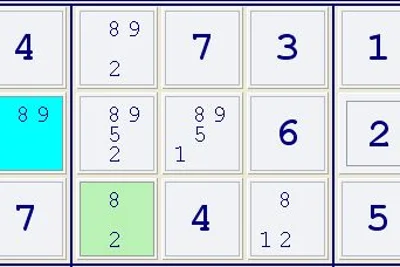 *note the method for filling in the possible answers is exactly the same as step 1.It is just repeated for each square and written in.

Step 7: Lastly(just a Small Thanks)

Thanks for reading my instructable, If you have any questions or know bout any technique i haven’t included please add a comment. I believe I didn’t copy anything directly from a site and i you spot that i have then i will rectify the problem. I used wikipedia,simple sudoku and brainbashers for information.