This tutorial will show how to make a paracord bracelet with a side release buckle. This can be worn as jewelry, and unlike chain, it allows you to store several feet or rope on your person at all times. When made on a larger scale, this can also be used as a dog or cat collar.

A reliable online source of paracord is Amazon.com. They carry a huge selection of cord in colors ranging from army green to rainbow.

You’ll need paracord, or equivalent 1/8" diameter cord, a tape measure or ruler, scissors, side release buckle, and a lighter (torch lighter works best). The amount of cord used can vary, but for this example we’ll use 10 feet of paracord to start with. Actual amount of cord used for the bracelet is about 1 foot of cord for every 1 inch of knotted bracelet length. So if your wrist is 8 inches you’d use approximately 8 feet of cord.

Wrap the paracord around you wrist and make a note of where the cord meets. Hold this point next to your ruler or tape measure and that’s your wrist size.

Keep tying the knots until you have filled the space between the buckle ends. The knots should be uniform from one end to the other. Tie each knot with the same tension to keep the them all the same size.

You can now use your scissors to trim off the extra cord close to the last knot that you tied. I trim one at a time and use my lighter to quickly melt the end I cut. Wait a second for the melted cord to cool just a bit and then use my thumb to press the melted end onto the surrounding cord so it hardens as it attaches. You must be careful with this step. The melted cord is extremely hot, and it’s possible to get burned, so you might also try using a soldering iron or wood burning tool for the melting step if you wish. Or even use something like a butter knife, the side of your lighter, or the knurled section of a tool to flatten out the melted end of the cord to finish it.

An alternative to melting the ends, is to tuck/pull the ends under the last couple of knots (I have used hemostats to do this on the inside of the bracelet) then trim them to finish. It does work, and is just barely noticeable as the cords add a slight bulge at that end of the bracelet.

If you did everything correctly, it should look something like this finished one. Once you know what you’re doing you can vary the amount of cord used by making the knots tighter or looser and pushing the knots closer together as you go.

A tip for paracord bracelets: If the side release buckle is large enough, you can loop the paracord around them again before you start knotting, to fill in the extra room on the buckle.

The 1/2" side release buckles are a tight fit for this, but will work, and the 5/8" size are just right.

This leaves a two strand core for the bracelet when you start knotting.

This gives extra cord in case you need it for whatever, but it also makes the paracord bracelets thicker and more rounded, which I personally didn’t care for and that’s why I stick with the two strand core. YMMV

Once you have the hang of the basic bracelet/collar, you can add another layer of cobra stitches overlapping the first set of knots, called a king cobra stitch/doubled Solomon bar/doubled Portuguese sinnet. The amount of cord used for a king cobra is about twice as much as for the regular stitch. Both the 1/16" and 3/32" sizes work well for the bracelets and can be used alone or combined with paracord.

Glow-in-the-dark paracord is available now, found from various online vendors and on ebay, but I’ve not used any myself, so I couldn’t say if it’s any good or not, or how long it glows. 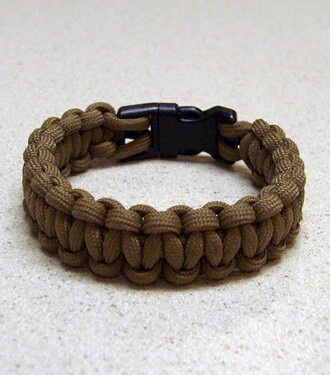