The Nureongi are mongrel dogs with yellowish coloring. The term is the transliteration of the Korean word “누렁이” meaning "yellow one”. 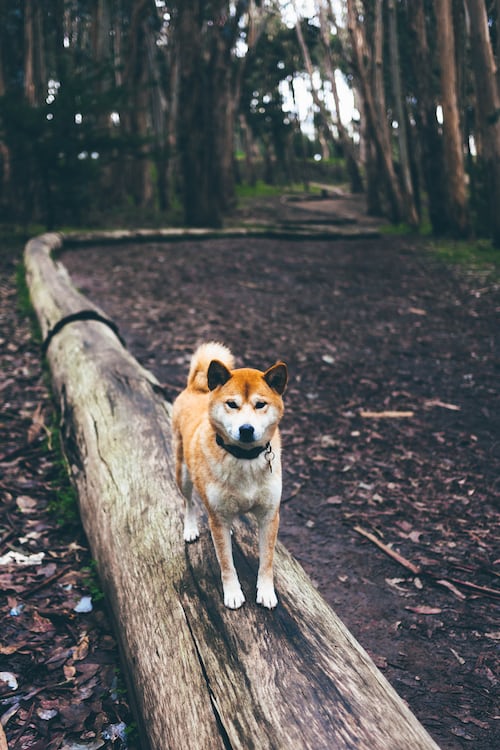 The Nureongi (also spelled Noo-rung-yee), also known as the Korean edible dog, is a yellowish landrace breed native to Korea. Like native Korean dog breeds such as the Jindo, nureongi are medium-sized spitz-type dogs, but are larger, with greater musculature and a distinctive coat pattern. They are quite uniform in appearance, with yellow hair and melanistic masks. Nureongi are most often used as livestock dogs, raised for their meat, and not commonly kept as pets.

There are several meanings of nureongi (“누렁이”), which basically means yellowy:

The nureongi is a Korean mongrel dog breed that is one of the favored dogs for long-standing tradition of eating dog meat, known as “gaegogi” in Korean.

Nureongi is a documentary that explores the history and culture of dog meat consumption in South Korea, one of the few countries where the breeding of dogs for human consumption is legal. Through interviews and on-location footage with animal activists, dog meat farmers, politicians, veterinarians, a diverse group of Korean people, and adopters of “meat dogs,” the film presents a balanced look into all sides of an emotive, sensitive issue. The livelihood of the farmers, the passion of the activists, and the history of this tradition are all essential in exploring this topic.

Tami, a Korean-American, saw a video clip that she could not get out of her mind. It was a video of dogs being brutally slaughtered in her homeland of Korea. After watching this clip, Tami began her mission of rescuing meat dogs in Korea. Her 3-plus year journey of visiting different local dog farms and meeting a diverse array of people from dog farmers to animal rights activists in Korea was filmed by Kevin, Tami’s family friend, who is also the producer of the world-renowned American sitcom “FRIENDS”. Nureongi captures the unbiased stark reality of the Korean meat dog industry.

The movie includes interviews of Korean activists, dog meat traders, veterinarians, educators, dog farmers, and average people on the street. The documentary does include a warning before a part that might be difficult for viewers to watch.

The film premiered in South Korea at the Seoul Eco Green Film Festival on June 7, 2021, and drew thousands of viewers after debuting on YouTube.

“I hope this film will give all of you a new perspective on the subject of eating dog meat and perhaps we can all be reminded that if we want our culture respected, we must respect the cultures of others,” said Bright.

No one knows the precise origins of the Nureongi dog. One theory states that this dog is a cross between native dogs and non-native dogs. Others claim this dog to be an ancient landrace, the ancestors of the Korean Jindo.

THE PURPOSE OF THE NUREONGI

In ancient days these dogs were hunting dogs. Alert, athletic, and agile, these could run down deer and other game working in packs. Today, this is a meat dog; people farm these dogs for their meat.

Nureongi is a beautiful dog. They are loyal, loving, and faithful dogs that bond closely with their master. People who live with these dogs say they are excellent with kids, and others in the family.

The Nureongi dog is a fairly vocal breed – in other words, they love to bark. Many people describe them as excessive barkers because of their strong desire to communicate with humans and other dogs.

On the flip side, they are smart dog breeds and not known to be aggressive towards humans or other dogs. Many of these dogs spend their whole lives in a kennel and even then, it’s rare to see dog fights occur.

Entropion is a condition that causes the eyelids to fold inward, causing discomfort to the dog.

Korea has some of the fantastic dogs in the world. Although Korea doesn’t have as many native dog breeds as their neighboring Asian countries. Korean dog breeds include the Jindo, Korean Mastiff, Sapsali, Jeju Dog, Nureongi, Donggyeongi and Pungsan Dog.

Several of these breeds are facing extinction. However, organizations all around the country are battling to save and preserve these dogs.

The Korean Jindo is an ancient dog from Jindo Island in South Korea. It is difficult to track the precise history of this ancient dog, as this predates written historical records. The lack of scientific research to identify Jindo’s ancestors makes it even more difficult to pinpoint this dog’s origin.

Experts believe Jindos are descendants of the Mongolian landrace, the Bankar dog. Today, these dogs are gaining popularity in several countries.

The Korean Jindo is an agile, highly alert, medium-sized dog. These dogs are renowned hunters. They specialize in pack hunting and is capable of working with other dogs in a hunt.

The next dog in our Korean dog breeds list is the Dosa/Tosa dog. The Dosa dog or the Korean Mastiff is a large-breed of Mastiff-type dog from Korea. Mee Kyun Dosa is one of the several Korean names for this dog.

International Kennel clubs such as the American Kennel Club and the United Kennel Club does not recognize this dog. Dosa dog is one of the rarest dog breeds in the world.

The Sapsali is a medium-sized native Korean dog. The Korean people consider the Sapsali lucky, and they believe these dogs can dispel ghosts and evil spirits.

Sapsali dog is an ancient Korean dog. No one knows the precise origins of this dog. Many Korean dog experts believe this dog originated in the first century AD. This claim makes this dog one of the oldest dogs in the world.

During the world war and the subsequent Korean war, the Sapsali came close to extinction. However, thanks to efforts taken by the government and a handful of breeders, this dog march forward.

The Pungsan to North Korea is like the Jindo to South Korean. This dog is highly intelligent, trainable, and alert.

Some experts speculate that this dog arrived along with the invading Mongolian forces. The dogs that remained in the North adapted to the mountainous lifestyle. Through generations of careful selective breeding became the Pungsan. Similarly, the dogs in the South became the Jindo.

Donggyeongi is the next dog in our list of fantastic Korean dogs. This dog is another ancient dog from Korea. Donggyeongi or Daeng Gyeon or Donggyeong Gae is famous for its short-bobtail.

The Japanese decimated the Donggyeongi dog during the Japanese colonial era. They destroyed this dog because of its similarity to ‘Komainu,’ the figures seen in Japanese royal shrines.

Today the Donggyeongi is a protected national monument of Korea. The Korean Gyeongju Donggyeong Dog Association has set up breeding units at Sorabol College and Yangdong Village to promote this breed.

The Jeju dog is extremely rare, even in Korea. They are from the Jeju Island in South Korea. Large, sturdy, and muscular, the Jeju is one of the largest native Korean dogs.

This dog, faced extinction in 1986, with only three surviving individuals. The government started efforts to restore this dog on a war footing. Today, due to careful restoration, there are 100+ pure Jeju dogs in Korea.

Several experts believe that this dog originated in China several thousand years ago. Nomadic people from China brought this dog with them before they settled on the Jeju Island.

The Nureongi are mongrel dogs with yellowish coloring. The term is the transliteration of the Korean word “누렁이” meaning "yellow one”. There are several meanings of nureongi, which basically means yellowy: A yellow object or animal. A dog or cow with yellow fur.

1- Which dog breed is banned in South Korea?

Owners of pit bulls, Rottweilers, tosas, and other designated dangerous breeds “will be banned from taking their dogs to education facilities, such as daycare centers, kindergartens, and elementary schools,” reported Kang Yoon-seung of Yonhap News, the largest news agency serving South Korea.

2- Are Jindo and Shiba related?

No, that’s not a Shiba Inu! To give you some perspective, the Jindo dog is considered a national treasure of Korea. The breed was dubbed National Monument No. 53 by the Korean Government in 1962.

3- What kind of dogs do they have in South Korea?

The most popular Korean dog breeds in the country are Korean Jindo, Donggyeongi, and the Sapsali.

5- Which dog is banned in most countries?

Jindos are known to be apprehensive and even downright fearful of water. These dogs do not make great water companions. Some owners have even reported their Jindos being afraid of rain. A Jindo will allow itself to be bathed by an owner it trusts, but almost begrudgingly.

7- Are Jindos hard to train?

A teacup dog is a miniature version of a breed that’s already small—Pomeranians, Chihuahuas, Yorkies, Poodle mixes, etc. Although these pups may take a cute photo, they come with a hoard of issues you need to be aware of if you’re considering adding one to your family.

11- Which dog can kill a Rottweiler?

A pit bull can easily take down a rottweiler, since rottweilers lack gameness and the agility pits possess. Most dogs tend to back off when they’re confronting an obvious threat, so chances are even a rott would back off from a vicious pit bull.

12- What is the strongest dog in world?

Banned breeds of dogs are any of the following:

The Jindo is a seasonal shedder and will shed very heavily twice a year, usually in the spring and fall. During heavy shedding, the Jindo needs to be groomed every day and given weekly warm baths to help the hair come out quicker. Use a comb, pin brush and deshedder when grooming during times of heavy shedding

15- How teacup puppies are made?

Teacup dogs can naturally occur as “runts of the litter,” but more often they’re the product of intentionally breeding two undersized dogs. Because the mother dog is so small, she can only whelp a couple of puppies at most and there’s a greatly increased chance of complications.

Nureongi is a medium-sized dog. They belong to the Spitz group of dogs. Bat-like ears, ■■■■■ tail, square-shaped body, and a wedge-shaped head are the hallmarks of this dog. This dog has a double coat, a long outer coat, and a soft-dense undercoat.