How To Play Minesweeper?

Minesweeper
The Minesweeper is a fun-filled single-player game. You have a rectangular board in which there are small boxes. Inside the boxes, there are “mines” or bombs. The main objective of this game is to clear the board without detonating any of them, with help from clues about the number of neighboring mines in each field. This game was developed in 1960 and since then it has become very popular. This game is seen in every PC and people enjoy playing it. People of all ages can play this game and have fun. Minesweeper is compatible with every operating system used today. There are hardly a few people who are able to complete the whole game.

Do play minesweeper and also recommend it to your friends!

Before starting the game, you need to know about some common terms:

Now that you know the terms so let’s get sweeping!

How To Play Minesweeper?
Minesweeper is a very basic game. There are mines that are scattered throughout the board. The board is divided into cells, which have three states: uncovered, covered, and flagged. A covered box is blank and clickable, while an uncovered cell is exposed, either containing a number (the mines adjacent to it), or a mine. When a player clicks an uncovered cell, and if it bears a mine, the game ends. A flagged box is similar to a covered one, in the way that mines are not triggered when a cell is flagged, and it is impossible to lose through the action of flagging a cell. However, flagging a cell implies that a player thinks there is a mine underneath, which causes the game to deduct an available mine from the display.

Step 1: Finding Your First Mine 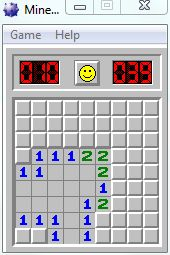 You start by clicking at any random place. You’ll have something like the image. Remember, the number is the mines adjacent to the block (as you can see in the image). See at the bottom of the image. The block at the extreme left (2nd from the right) Therefore, it is mine. You must Flag it by right-clicking. Hurray! Now you’ve found your first mine. Do the same with others. If a block with 2 has only two unopened mines flag the unopened ones and same for other numbers (if you got 8, you’re a pretty lucky person

Step 2: Clear the Other Blocks

Now the time has come when you need to clear other boxes that are left. As you can see in the image, there is a mine uncleared at the bottom left next to the flag. Clear it and it will show you a pattern as shown in the image 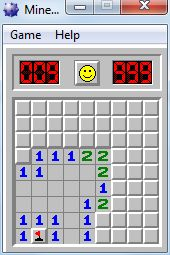 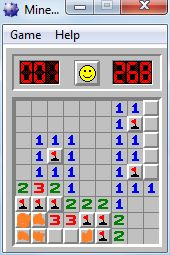 In this game, you often come across a situation where you don’t know what to do. You can’t decide which box to click. If you click the box with a bomb in it, the game will finish right away! At this time, you need to make a guess. There is only one uncleared mine left with the digit “3”. Clear that mine and you will find the digit “2” there (as shown in the image). 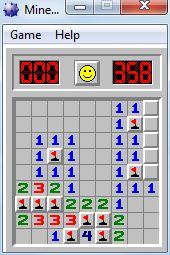 The basic algorithm is:

If you do this properly, there are very few situations where you will not have enough information to solve the puzzle without making a mistake.

Sometimes, you can’t determine the placement of mines based on just looking at one square, and you’ll have to combine the constraints in order to solve the puzzle.

Here are some things, you should know about minesweeper

Is Minesweeper Hard?
Well, people find minesweeper very hard. The reason is that they don’t know the rules and tips of the game. They start from the wrong side and get a bomb that finishes the game.
Minesweeper takes some practice and once you become a pro it doesn’t seem hard at all. You need to give a lot of time to it.

How Many Mines Are There In Minesweeper?
There are three levels of difficulty: Beginner has 10 mines, Intermediate has 40 mines, and Expert has 99 mines.

Welcome to Minesweeper. If you’re a Windows’ user chances are that you already have the game on your computer. This guide will help you in completing your first game. The rule of the game is simple, the number on a block shows the number of mines adjacent to it and you have to flag all the mines. 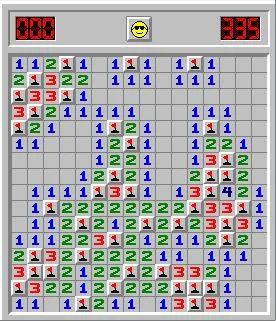 Now that you know the terms so lets get sweeping !

You can start by click ing at any random place since it is your first game. Chances are you’ll have something like the image. Remember, the number is the mines adjacent to the block. So let’s take the case in the image. See the bottom-left block in the image (3rd from the left and 2nd from bottom). It has 1 mine adjacent to it and there is only one unopened block next to it. Therefore, it must be a mine . Flag it by right clicking. Yay! Now you’ve found your first mine. Do the same with others. If a block with 2 has only two unopened mines flag the unopened ones and same for other numbers (if you got 8, you’re a pretty lucky person

Its time to clean up the other blocks. Block A (see image) already has a mine next to it. This means that there won’t be another mine adjacent to it. Thus, you can clean the mine on the bottom left.

You’ll often come across a situation where you have to make a guess . But most of them which (seem to) require a guess comes when the game is about to finish. Like in this case (see the image). There is only 1 mine left and if must be near the '3’s. In either of the blocks. So the best thing to do is to open the block which is not common to both like the blocks marked with orange on the image and you’ll be able to find the mine.

Before coming to this step, I expect you to have completed at least 6 beginner fields and have got some experience. Here is a pretty useful technique I found. Its called the 1-2 pattern. Here in the image above you can see the 1-2 facing a wall (of blocks). Here, you can clear out the block next to one (not in the common field!). This technique will come in handy when playing intermediate and advanced levels. Try to think there is a mine in the block I told you to clear, will the 1 and 2 be satisfied?

Often you’ll come across something like the case above. Here a mine is present in either of the blocks marked in orange. You can open the blue block, it is safe. Think of it yourself, what will happen if a mine is placed in the blue block, will the 1 s be satisfied?

Here are some things, you should know about minesweeper