How to Interpret a Correlation Coefficient

In statistics, the correlation coefficient r measures the strength and direction of a linear relationship between two variables on a scatterplot. The value of r is always between +1 and –1. To interpret its value, see which of the following values your correlation r is closest to: 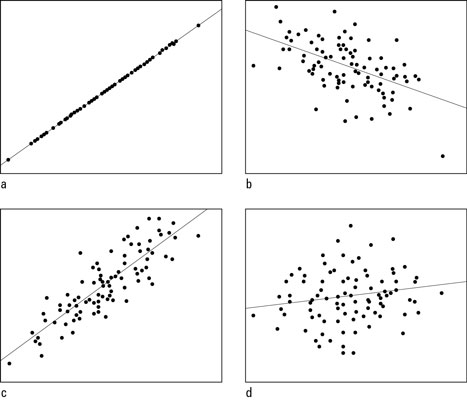 Many folks make the mistake of thinking that a correlation of –1 is a bad thing, indicating no relationship. Just the opposite is true! A correlation of –1 means the data are lined up in a perfect straight line, the strongest negative linear relationship you can get. The “–” (minus) sign just happens to indicate a negative relationship, a downhill line.

How close is close enough to –1 or +1 to indicate a strong enough linear relationship? Most statisticians like to see correlations beyond at least +0.5 or –0.5 before getting too excited about them. Don’t expect a correlation to always be 0.99 however; remember, these are real data, and real data aren’t perfect.