How to Draw a Heart Shape

Drawing a heart shape while keeping it symmetrical and well balanced looks simple. Any homemade Valentine is going to need at least one, maybe several. It’s easy to cut out from folded paper, at least your results are the same on both sides. But how do you get the proportions right drawing it freehand on something you’d rather not fold?

Here’s a method that can work even for a beginner, though with practice you can sketch it without the coin and get it right every time. 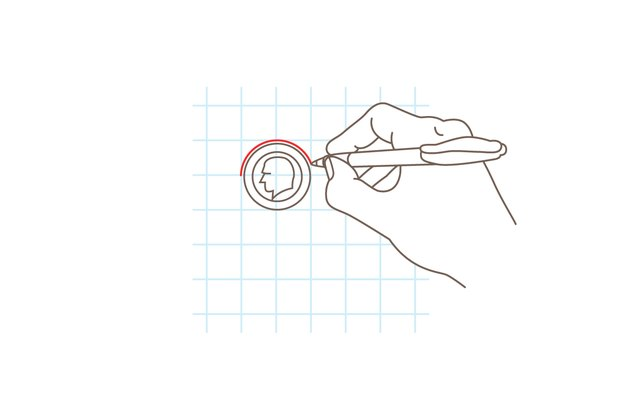 Line up the coin on your paper and start on the right (this will be the left side of the heart shape) about a third of the way up on it. Draw around the coin till you have a half circle at an angle.

I used a red pen for Valentine’s Day, but if you’re new to drawing with templates you may want to sketch in pencil first and then go over it with color. 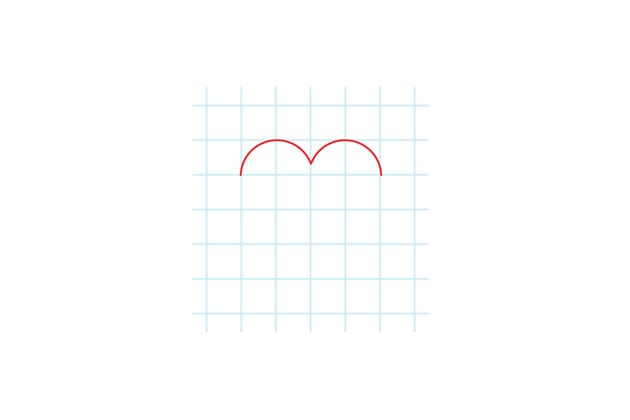 Move the coin over and be careful to line it up so that the line width from the previous side doesn’t count. It will overlap into the space under the first curve a little, let it. Start where the lines meet and draw around the coin till you get as far down on the page as you did on the first curve.

I removed the coin to show how both curves look together. The heart is nearly done. All you need now are some straight lines – and some idea of how far down and what angle to put them. 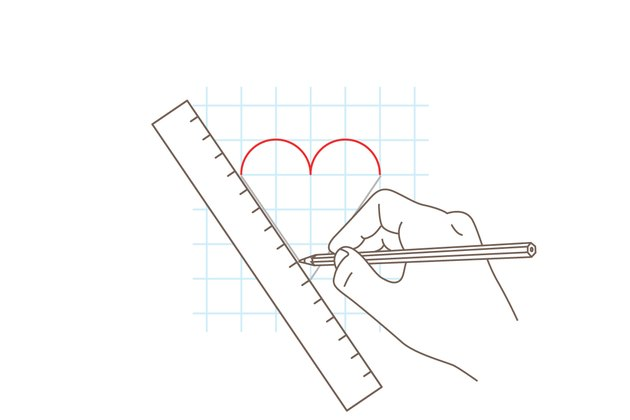 Using the coin as a measurement, line it up under the lowest point of the line you drew. See how far it is from the center of the heart down to the lowest point on the coin. This gives the heart a nice proportion. If you don’t have a grid ruler, just try to line up your ruler centered and as straight as possible in the direction of the heart.

You may be drawing the heart at an angle on the paper, so learning to line things up when there isn’t a straight edge on the paper at right angles is an eyeball trick. I got used to it, and one thing I noticed was that the smaller I drew things, the easier it was to line it up well. I have no idea why, but if you draw many hearts with this proportion it’ll get to the point where you can skip this step. You’ll be used to putting the point as far down as you want it for a nice proportion.

I needed a line 1 3/8" down from the center, and that’s where I’ll place my dot for the point of the heart. 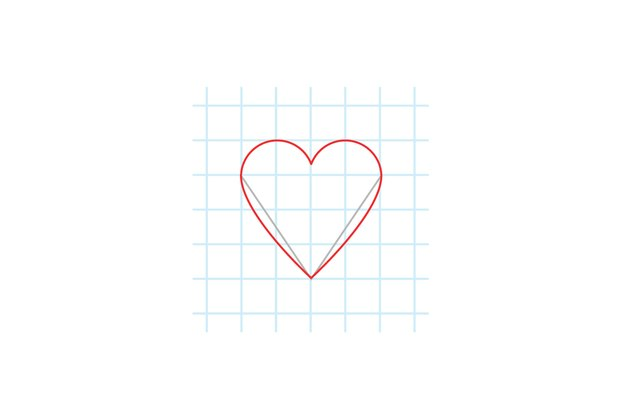 Draw a dot for the tip of the heart, centered between the two sides.

I used a ruler to connect the sides. That resulted in a heart, but it looked stiff and unattractive because the lines were too straight. In pencil, go ahead and sketch the straight lines lightly. Once they were in, it was easy to sketch again and give the sides of the heart a slight curve as they met at the point.

I’ll draw a thicker line that includes my straight lines as part of it for the finished heart you see at the start of this lesson. Once you finish, if your line is off in any way, you can clean it up by widening the line. Fix the problem and then make the line thicker all the way around to make it look as if you meant to do that.

I usually thicken the lines on the inside, drawing inside the final lines. But if your final lines went outside instead, you can thicken that way too. It depends on the space you want the heart to fit too.

Or fill in the center solidly, or decorate as you please. For hearts that aren’t cutouts, this method will give symmetry and a good proportion. You can vary the proportions later, do short squat hearts and long narrow hearts, and with practice you won’t need the coins. But for a beginner this is the best way to get symmetry and a good heart on the first try! 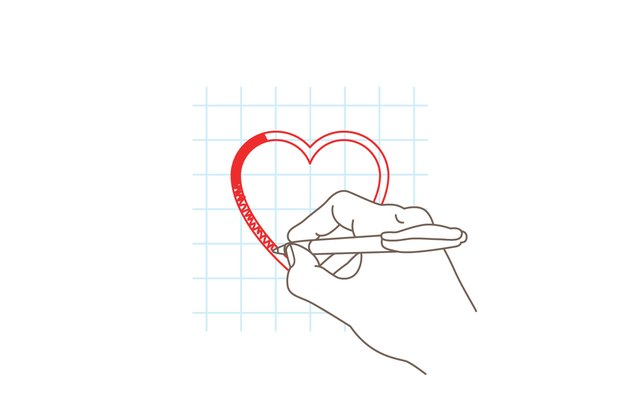 Doubling the line to thicken it is the easiest way to clean up irregular lines. I decided to make mine dramatically thicker, and show the outlines. It’s easier to draw right next to another line and get the angles the same than it is to draw the shape in the first place. If you want a double-line like this without the mistakes, pencil your whole design and only ink the outside and inside lines after you pencil them. Then erase the pencil lines.

You can also fill in between them if you’re using poster paint or markers or something that’ll contrast, that can look nice. I’m going to fill in solidly because I’m fixing a mistake, but the ways you can embellish a heart are only limited by your imagination.

Have fun and show your love!

Another way to draw a heart is to fold card stock, cut out a heart, then use that for a template and draw around it. Use a variety of round objects to draw hearts of different sizes.

Sketch in erasable pencil before using ink, paint, felt tips or colored pencils to draw the final version. I did the example without and you saw the results, my guidelines had to be covered up.