How Long Do Water Heaters Last?
Boiler Replacement
How many ounces in water?
What are Carbomers?
Is KCl Soluble In Water?
Jackie_Reid September 26, 2020, 7:42pm #2

A water molecule is slightly charged on both ends. This is because oxygen is more electronegative than hydrogen. 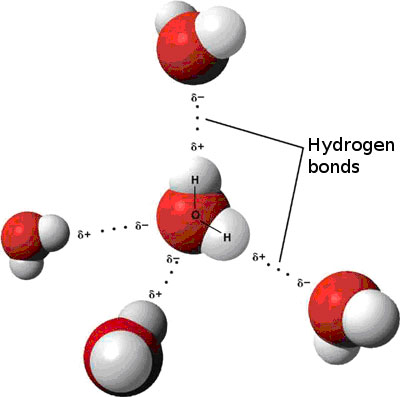 Hydrogen bonds hold water molecules together, as seen in the picture above. Cohesion creates surface tension which is why if you fill a spoon with water, drop by drop, the water volume will actually be bigger than the spoons surface before the water falls off.Here is video showing how a paperclip can float on water - its actually being held up by the hydrogen bonds formed between water molecules which give water its surface tension.

Similar to cohesion, but adhesion is when the hydrogen bonds in water allow for the water molecules to be held to another subtance.High Specific Heat

Specific heat is amount of heat absorbed or lost for 1g to change 1ºC, which in the case of water, is pretty high. This allows for evaporative cooling to occur, which is when heat energy is transferred to water molecules , and evaporating water removes a lot of heat energy from an organism (eg. when we sweat)Other important characteristics of water involve it being a universal solvent, along with its unusual density. Water, unlike any other solid-liquid, is more dense in its liquid form than as a solid, which is why ice floats, and this allows for entire habitats to exist underneath layers of ice floating on oceans. Its neutral pH (7) is also a relevant characteristic.

Water is most abundant of all the compounds. It is essential to all forms of life. It plays a very important role in daily life. The human body is composed of 65 to 70% of water by weight and it is necessary to maintain most of the functions of our body.
80% of the total surface area of earth is covered with water.

Water is known as universal solvent because, many substances whether they are solids, liquids or gases, dissolve in water.
Solids sugar and salt and liquids alcohol and acetic acid (vinegar) dissolve in water.
Gas Co2 slightly dissolve in water, water dissolve only a small amount of oxygen which enables underwater life like fishes and water plants to flourish.

Pure water is colourless, odourless and tasteless. The taste of drinking water is due to dissolved gases from air and salts from earth. Water is only substance that exist in nature in three different states which are solid, liquid andd gas.

At normal conditions the melting point of ice is 0°C and the boiling point is 100°C which are high as compare to other chemically similar compounds. These properties are due to the hydrogen bonding of water.

Water is remarkable solvent. It has ability to dissolve many substances. Due to this fact it is termed as (universal solvent). Because of this property of high solubility water dissolve almost every thing at some extent, and becomes highly impure as it travels underground. This is the base of pollution of natural water and unfit for daily life.

Water which does not easily produce lather with soap is known as hard water. The rain water on its way to ground dissolved carbon dioxide from the atmosphere.
This water flowing through beds of soil or a rock, containing calcium or magnesium carbonates, the carbon dioxide in water converts the carbonates into bicarbonates which become soluble in water and flow down with it. Water may also dissolve chlorides and sulphates of ‘Ca’ and ‘Mg’. This underground water contains the ions of calcium and magnesium which makes the water hard.

Types of hard water are

(a).Temporary hard water: This is due to the presence of bicarbonates of calcium and magnesium.

(b). Permanent hard water: This is due to the presence of chlorides and sulphates of calcium and magnesium.

The soft water is that which easily forms lather with soap and does not produce curds. It is pure and it is fit for human consumption. It is colourless, tasteless and odourless.

Water forms the essential component of all living things. Some important properties of water and its manifestation in nature and in real life has been discussed in this writing. Water is a chemical compound composed of two hydrogen atoms bonded with an oxygen atom, its the most abundant chemical compound found on the earth. Some of the water’s unique properties are essential for life to exist on the earth. Due to its high boiling point, water exists predominantly in its liquid form in the range of environments where life flourishes although the other two phases of water i-e ice and vapor also play an essential role in shaping the environment.

Water exists in three physical states that are vapor, liquid and ice. Liquid phase is most important for biological phenomena.The structures of both ice and are dominated by the hydrogen-bonding interaction in which the negative end of each molecule is attracted by the positive end of other molecules in this way molecules are extensively interconnected to each others through attractive force between oppositely charged ends of molecules. These forces are weaker than dipole dipole interactions but stronger than covalent bond. In ice, water molecules are more symmetrically arranged and have lager spaces between them, this is the reason ice has lower density and floats on water surface. This property of water is a great blessing for nature as at very low temperatures when lakes and water surfaces freeze, fish and other living organisms can still survive in liquid water beneath the ice layer.

Because the O–H bond of water is strongly polarized, the electron density around the hydrogen atom is very low and the O–H bond is a little weaker as compared with most covalent bonds. Thermal changes in the liquid often result in sufficient further polarization of the O–H bond that the hydrogen nucleus can dissociate as a proton,or H+ ion. Water being an excellent solvent for ions, can solvate the resulting OH- and H+ ions. The spontaneous dissociation of water takes place at 25*C and the concentration of H+ ions and OH- ions in pure water is equal to 1x10-7 molL-1 and a pH of 7. The highly polar nature of water makes it an excellent solvent, especially for other polar compounds like salts, alcohols, carboxylic compounds, etc.

Due to the hydrogen bonding water has the ability to wet the surfaces or adhere to the surfaces that are called hydrophilic or water loving. Other substances called hydrophobic or water fearing like oil, fat, wax etc, do not wet with water. Water crawls up or rises in glass or other containers and capillary tubes.This phenomenon is called capillary action. This is also a very important property for water.Capillary action is responsible for the movement of water through soil, movement of blood through blood vessels and water carrying nutrients through the roots of plants.

This is another remarkable property of water that it has extremely high capacity to absorb heat without a significant increase in temperature.Both the sand and the water absorb the same amounts of heat energy, but the temperature of the sand is higher than the water temperature.The moderate climate in coastal areas is because of the absorption of huge amounts of solar heat energy by water during day time and the slow release of heat energy during the night. The oceans cover a vast area on earth (about 75 percent of the surface area) are responsible for tempering the climate on earth which permits life to exist.

Latent heat of fusion and vaporization

Latent heat is the quantity of heat energy in calories per gram absorbed or released by a substance undergoing a change in phase for example from liquid to solid and vice versa, and liquid to gas or vice versa without a change in temperature. Water has unusually high latent heats of fusion and evaporation.
Some examples from daily life to explain these properties of water are given to make things clear. Ice cubes are used to keep drinks cool in insulated containers. The ice absorbs heat from drinks during melting and keeps them cooler for longer period of time. A tub of water is placed in green houses during cold nights because on freezing water releases heat which regulates the temperature of greenhouse.
Condensation of water vapors releases same amount of heat absorbed by water during evaporation. It is observed that latent heat of vaporization is over five times the amount of heat required to raise the water temperature from freezing to boiling. This large amount of stored heat energy is responsible for making steam heating much effective for central heating systems in homes and factories. The steam in the process of condensing to water releases this stored heat energy. A thunder storm in the afternoon during a hot summer day is another example of violent release of heat energy by the condensation of vapors present in hot moist air in the up
per atmosphere.
Waters absorbs heat energy from surrounding air during evaporation, cooling the air. In water misting systems used for cooling during hot summer days our body feels cooling due to evaporation as the water absorbs heat energy from the body during evaporation.