Did you write a word? Or should I say that you misspelled it? ۔

Spelling sounds like a good word, but every time I use it, the fox tells me it's wrong. So I assume it's not a word (in my context), yes, I know it's a real word in another context. But isn't it bad to say that you spelled it wrong?

It made me think! Smell is not a word! A link to one of the answers below is a dictionary and contains many spelling references from past tenses. Right or wrong?

That is, spell and spell well! Change

My Oxford and Collins Cobalt Dictionary says your spelling and spelling are good. Foxes sometimes make small mistakes, so don't worry. You wrote it wrong and wrong, but I prefer the first sentence. But it has to be said, accused / badly dressed. There are of course many tricks in English and you have to stick with it!

Spelling is a word. This is the past part of the mantra.

It is also a type of wheat and also a name.

It depends on whether you use British English (and the correct spelling) or American English.

I suggest you go to Microsoft Word and change the language layout to British English so that you do not have any difficulty in writing letters and articles etc. You will continue to have issues with some US sites.

Past tense and mostly British participant

The spelling is correct in American English.

This is taken from the Mary Webster Online Dictionary.

Spelling is a word, but it's mostly English past tense and participle is magic.

Note: This is also a name. It is a type of hexaploid wheat.

You mistyped it, I don't think so. 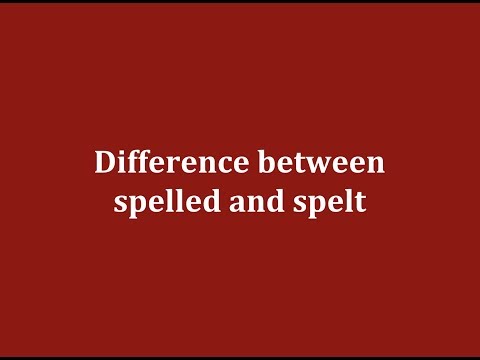 As I said spelling always sounded like bad English to me, I taught all my schools the spelling they taught me in English.

Spelling is a real word.

It depends on whether they are exchanged or not.

It doesn't feel good to write there.