I decided to try building an infinity mirror after seeing this. I had the IKEA frame laying around and decided to try to use that, and it was actually a really god fit for this project.

You could maka a simpler version by just using a single piece of LED strip and wrap that around the sides, but I had these LEDs laying around from another project.

The RIBBA frame is available in black which would save you the painting also. 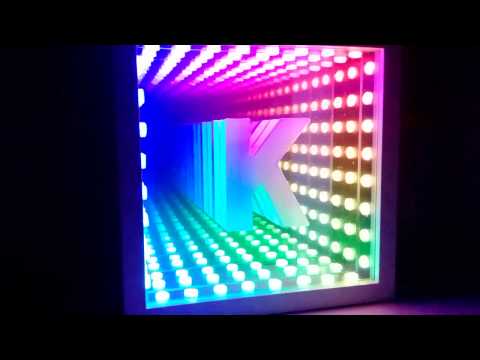 Everything is mounted on the inner frame which leaves the outer frame nice and untouched.

I made a simple drill template and glued it to the sides of the inner frame to get even spacing of the LEDs.

I drilled 8mm holes for the LEDs.

Drilled 12mm countersink holes that the LED will drop into, so that they fit between the inner and outer frame.

You don’t want to see the fram inside of the mirror.

Step 5: Glue on the LEDs

Used some hot glue to glue on the LEDs.

These LEDs have positive (+5V), negative (GND) and a control pin. You’ll just need to connect them in a long serie. These’s a about 1mm of space around the inner frame, make sure the wire will fit inside the outer frame.

SparkFun explains it all on how to hock up the LEDs. ws2812 guide

Step 7: Hot Glue As a Diffusor

I cut small pieces of a hot glue stick and used that as a diffuser for the LEDs, to give it a nice soft lightbulby look. I glued them on infront of each LED.

Add the mirror film to the inside of the frame glas. This was tricky, use a drop of soap in water and spray it on the glas before adding the film. (I’ll probably redo this part again later, I ended up with a lot of small bubbles/imperfections. But they don’t really show when the light is on)

Step 9: Drop in the Glass

Test drive with the one way mirror film in place.

I added a paper letter (my sons initial) in the center which I got from the local craft store. here Which I think really add a nice personal touch to the project.

Step 11: Drop in the Mirror

Drop in the mirror and add the protective back on it.